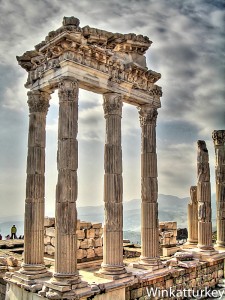 One of the most popular tours in Turkey is that which links the seven cities mentioned in the Book of Revelation, the last of the New Testament. Besides the religious aspect, in this itinerary you can also visit one of the most tourist areas in Turkey, where you will find beaches, historical sites and unique landscapes.

The Book of Revelation was revealed to the Apostle John on the nearby island of Patmos and it mentions seven cities of Asia Minor where the future of the Church is summarized. Cities are Ephesus, Smyrna, Pergamon, Thyatira, Sardis, Philadelphia and Laodicea. All of them are located in the rich western Anatolian Peninsula.

The tour begins on Smyrna, today Izmir. The ruins of Agora are in the populous center of the third largest city in Turkey. Izmir has not ceased to be inhabited, so not much remains of the Roman city. However, the visit allows us to approach Kemeraltı bazaar, the largest outdoor bazaar in the world, located right next to the ruins. In Izmir we can also visit the church of San Policarpo and have dinner on the seafront, the famous Kordon.

We continue with a visit to Pergamon, one of the richest cities of the ancient Roman province of Asia and the place where parchment was invented. The ruins of the Acropolis are at the top of a mountain which is located in the center of the modern city of Bergama. A modern cable car takes us to the top, where it is necessary to emphasize the spectacular amphitheater that allows you to admire the view of the valley and the modern city. Galen was born in Pergamum, he was the most famous doctor of antiquity. The ruins of his hospital, the Asclepeion, are to the left of the entrance to Bergama.

Our next stop is Thyatira, the ruins are among the worst preserved, but in our way we will know the favorite city of the Sultans, Manisa, with the pretty Muradiye mosque, designed by the best architect of the Ottoman Empire, Mimar Sinan and built by his disciple Mehmet Aga, who later was the builder of the Blue Mosque. In Manisa there is a recommended provincial museum, a nice bazaar and can taste the Manisa Kebab. Even more famous is the Mesir Macunu, a curious sweet with spices and herbs that his origin has in a medicinal recipe and that today is prepared in many different presentations.

Alongside ongoing Salihli, we will find some of the oldest archaeological sites in Turkey, it is the time of Sardis. The capital of Lydia was a wealthy city and the first place where gold coins were minted. The myth of King Midas took place at Sardis and its origin are the auriferous sands of the river Pactolus that crosses the ruins of the city. It should be noted the temple of Artemis, the Gymnasium and the Synagogue..

From Sardis we drive to Philadelphia, located in the Turkish city of Alasehir. It's the most scarce ruins among the seven churches but the trip there takes us through the endless vineyards of the province of Manisa, one of those landscapes with which Turkey often surprises us.

The next stop is Laodicea, near the city of Denizli. Laodicea He is undergoing intensive restoration work and you can admire, , etc., the amphitheater, the stadium and the thermal baths. Near the ruins of Laodicea one of the most visited sites of Turkey is, Pamukkale. The Cotton Castle, as its name means in Turkish, offers us the unique landscape of a mountain covered by white calcareous deposits forming semicircular pools. Do not miss the visit, if possible, try to be present at sunset, when the red rays on the white stone make the place turn into something difficult to describe.

Finally, the best ruins in our trip, the fantastic Ephesus. Probably the best archaeological site in Turkey and the most visited. It is possible to walk along the streets of the city and contemplate the enormous theater, Temple of Hadrian and pride Celso library, whose two-story façade is in very good condition. In addition, in the vicinity you can visit Basilica of St. John, the House of Virgin Mary and the remains of Temple of Artemis, one of the Seven Wonders of the World. An area where we also find the beautiful Greek village Sirince and the resort town of Kusadasi, with its grand hotels and its bazaar always full of travelers arriving in the many cruise ships that stop at this port of the Aegean Sea.

Status of the Seven Churches of Revelation

Temple of Trajan in Pergamon Acropolis

Theatre of Pergamon. The world's steepest.

Archway in the ruins of Thyatira

Temple of Artemis at Sardis. One of the oldest in Anatolia

Ruins of Philadelphia in Alasehir

Remains of Basilica of Philadelphia

Basilica of the Agora of Smyrna.

Ruins of the Agora of Smyrna

Library of Celsus at Ephesus

Temple of Hadrian in Ephesus