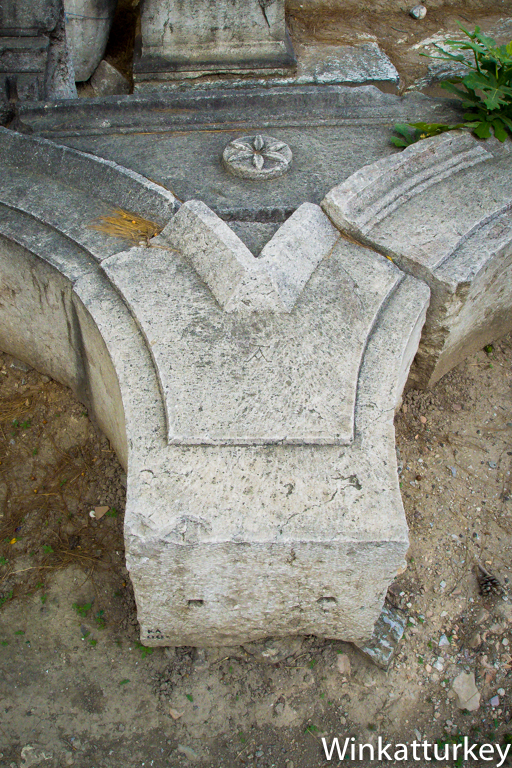 Thyatira is the church that receives the most serious accusations in the Book of Revelation. Qualified worldly, is accused of idolatry and sexual debauchery. Nowadays, the quiet city of Akhisar has become the first snuff producing area of ​​Turkey and its location on the highway linking Istanbul to Izmir, the two main ports, is favoring a growing industrial development. In the center of town we found the ruins of a few of the best known cities of Anatolia since ancient.

Thyatira was an ancient city that was fighting on the road Sardis Pergamum. After the passage of Alexander the Great and their subsequent integration into the Roman Empire, was known for its many craft guilds covering almost all activities of the time. Among, highlighted the producers of dyes that were well known to produce a red color did not use crustaceans whose production, the usual procedure of the time.

The appearance of Thyatira in the Book of Revelation is very noticeable. Not only is ranked as the most deviant of Christian communities mentioned, but letter directed to the city is the longest of the seven. Christ acknowledges the presence of good Christians in the city but then lashes a false prophetess called Jezebel which is spreading libertine sexual practices and consumption of meat sacrificed to idols. In the history of the Church, Thyatira period would be associated with the Middle Ages, where the institution suffered deviations from the doctrine and was involved in more typical actions of an earthly power of a religious institution. Thus, many scholars to the Church of Thyatira represents the dark ages.

Over the years, Turks came to town and this between the Byzantines and the Turks themselves. A late fourteenth century, definitively joined the Ottoman Empire. However, the Greek community of the city remained very large. The Greek Orthodox Church still has an Archbishop of Thyatira who is also head of the church in Britain id="n2c280_3"> .

In 1922, during the liberation war, both sides accused of horrific atrocities and genocide in the city. The Greeks say that the entry of Turkish troops killed 7.000 civilians of Greek origin. For his part, Turks claim that the Greek troops retreating completely burned the city and killed all Turkish citizens who had not escaped. What is certain is that there is currently no Greek community and not are old houses in the city, everything looks like it was built in the last 90 years ago.

The ruins of Thyatira are located in a park in the heart of the city and surrounded by shopping and the bustling bazaar. Admission is cheap, but you can not really see anything that is not visible from outside the gates that close the park. Remains of an imposing basilica and a triumphal arch fallen, highlighted in a quiet walk among debris that fill the park. No missing some coffins and remains of fountains and columns. Among the ruins walk some Mediterranean tortoises and the characteristic large snails that accompany us on many visits to archaeological sites in Turkey.

The little 85 Km de Izmir, Akhisar is one of the regular tours from the Pearl of the Aegean, usually combined with a visit to Manisa or Pergamum.

See map of the Seven Churches of Revelation

Bow on the floor of the ruins of Thyatira

Remains of the basilica in Thyatira

Remains of the park along the ruins of Thyatira

Akhisar park with the ruins of Thyatira