Ephesus was one of the 12 Ionian cities on the shores of the Aegean Sea. An important religious center, cultural and commercial.

It's amazing to walk among the remains of this great classical city, through its major access roads, streets and observing their temples, housing, sources and other buildings. One can well imagine what life would be there once. Do not think there's another place in the world like.

According to a myth, the city was named Ephesus by a queen of the Amazons (ancient nation of female warriors).

To put this in the time, first thing you have to bear in mind is that the sea came to town. From Port City is accessed by a wide avenue, paved with marble and columns and shops on both sides, that gave directly to a huge theater with a capacity for 25.000 spectators. The theater was also used for circus performances.

Before arriving at the theater on the left are the remains of Gym of Vedio (siglo II) with their training camps, baths, pool, rooms for exercise, etc.. The remains are widespread.

From theater, walking down the via Sacra is accessed agora , which is the Hellenistic period, where economic transactions are conducted and commerce of the city was developing (siglo III a.c). It was a large square room with columns and about which there were numerous food shops and crafts. The stores had a bow and facade 12 m. depth. It is said that S. Paul worked here making tents. 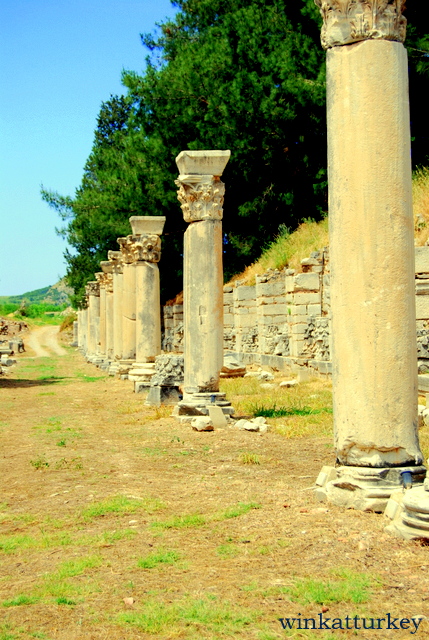 Columns of the Agora

Leaving the agora, through the south gate of the same, we'll be shocked to see the impressive façade of the Celso library, built facing east so that the reading rooms light is best exploited. Housed more de15.000 scrolls. The facade statues depicting the Virtues: Stops (Goodness), Episteme (Knowledge), Ennoia (Thought) and Sofia (Wisdom).

From here heading up the Way of the Curetes (Ancient Greek "Kouretes", divinities are) and left hand are the Roman public latrines, they were only for men. In a nearby well was found the famous statue of Priapus, with a huge penis and which is now in the Ephesus Museum in Selcuk.

Also the left hand Temple of Hadrian, having a wonderful Corinthian friezes and a head of Medusa, which was used for protection against evil spirits.

Are front the terrace houses, entry is extra, 15Tl (about 7 Euros), but the truth is they are very interesting. Here one can appreciate the luxury with which the Roman patricians lived. From the time of Augustus these homes are wealthy Ephesians were decorated with beautiful frescoes and mosaics. Houses had luxurious rooms, baths, dining and kitchen. The truth, nothing to envy today. Built at the foot of the mountain in the south of Ephesus, the roof of a house is the terrace to the next house. Were occupied until the seventh century D.C..

Following the Way of the Curetes and the left hand is Trajan font, most curious, the standing remains of the huge statue of the Emperor, on a ball.

The street ends at the Gate of Hercules, two statues of the hero in the main columns. Now we enter the top of the city. To the right we find the remains of a huge Emperor Domitian temple dedicated al, one of its sides with inscriptions remains home to many. Following this path will also see the ruins of Water Palace, and a curious water tank, amazing for that time.

Entrance “Street of the Curetes”( del Griego old Kouretes, divinities that are sometimes confused with them Coribantes the Dáctilos).

If it keeps up without turning on the right a Monumental Source, a temple and Temple of Hestia Boolean, in which a flame burning steadily. At the end of the street Buleterión, a much smaller theater than the previous, in which musical and Council meetings were held town.

Near the small theater, the remains of the baths and other gym. Near which no other box office entrance to the city.

Within the city of Ephesus there are not many trees or shadows to shelter and in this area of ​​Turkey and the heat is quite, so between the months of April and October must come prepared, cap, umbrellas or something to protect from the sun and of course water. Within the enclosure can not buy drink and entry price is abusive.

In June and July many cultural events and performances of exceptional quality are held at Ephesus (opera, ballet and concerts). Tickets are sold at the Ephesus Museum in Selçuk.

To get from Selçuk, which is less than 3 km you can take a taxi or dolmus, we will close the entry.

Temple of Hadrian in Ephesus

Sculpture on the facade of the Celsus Library

Library of Celsus at Ephesus

Columns of the Agora

Details of their way buleterion

Path to the city linking the port with the theater

Library of Celsus seen from him now

In one of the access road to the city

South Gate of the Agora of the city