The henna It occupies a very important place in Turkish culture. There are various rituals 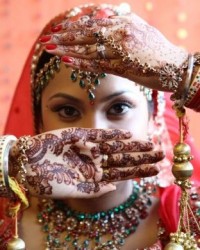 related henna, It is used at least in 3 important occasions:

– In the hand of the bride before the wedding. The meaning is that she is dedicated to her
husband and children, home and God.

– In animals to be sacrificed to God.

– The mothers put their children who go to mili, They offer his son as a sacrifice to the nation.

It is one of the rituals that even today remain in Turkish culture. Formerly the wedding celebrations lasted nearly a week. Starting with sending the bride's trousseau trousseau home from novio.El was carried by a horse cart which preceded a drummer and clarinet, parading through the streets with great pride to show everyone the bride and her trousseau.

It continued with Bath Day Bride, in which all the women of the two families went to a Turkish bath. The bride entered the hammam surrounded by his guests, entering they are holding lighted candles and singing songs. This custom still today is practiced by some brides and some hammam offer today the possibility of renting its facilities for this day.

After that, It is still home of the parents of the bride, where it is celebrated “henna night”. The groom's family put henna on a silver tray with candles and brought home the bride. Then all the women of the family and the bride dresses in velvet and satin embroidered in gold put and went to a dinner that was served to all. The bride with her face covered with a red veil , surrounded by bridesmaids and friends entered a lit by candlelight and the rhythm of the songs they sang all room guests. The bride kissed the hand of older women as a sign of respetoy sat in a place specially reserved for it.

They invited to the ceremony began to sing special songs for the occasion, such as “high high hills”. In the palm of a happily married woman she promised a piece of dough put henna, then carefully wrapped her hand and then were put henna remaining unmarried young to bring them good luck and most importantly, a happy marriage future. After all began to dance together. It was the last night I spent at home parents.

Over time the tradition has been changing and already pre-wedding celebrations are not as long. And on many occasions and attend the ceremony both men and women of both families.

Although some brides still go to the steam room with the women of the family “Gelin Hamami” in addition to holding the “henna ceremony“, most they carried only the last one.

As in all cultures and countries, celebration varies more or less, according to the social status of the family. Poor families organized a banquet offering everything they can to their guests. When the family is wealthy, the celebration is big, musicians are hired, cooks, Waiters, different types of food served, ice, traditional sweets,…

When a house or farm this ceremony is held, the rapidly we distinguish, because the facade is covered with a large Turkish flag. 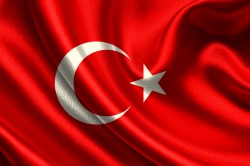 The ceremony is very curious, They remained virtually intact all rites.

They are arriving guests and are warmly welcomed by family. Take a seat on one hand the groom's family and another family of the bride. This talk, you eat and drink, in a relaxed and cheerful atmosphere. Background sounds traditional Turkish music. 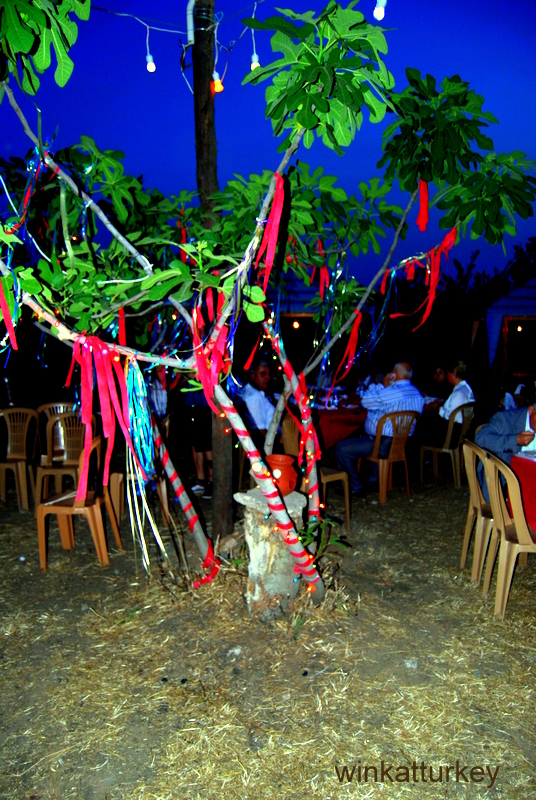 People laugh, walks, some sweet taken, while they are waiting for the bride after dinner to change clothes and appears with her new outfit, a spectacular velvet and satin dress with gold embroidery. 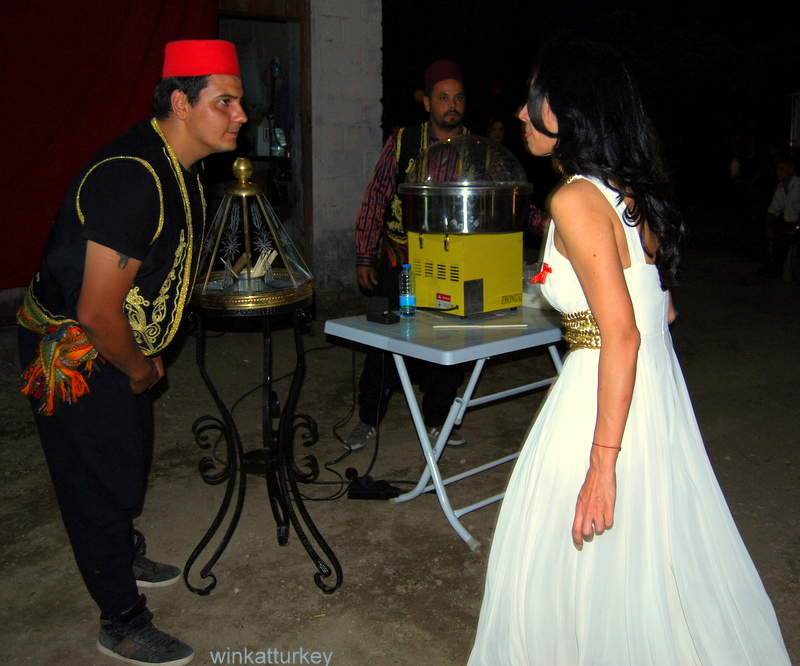 When the bride returns after changing clothes, it becomes the center of attention of all the guests. His best friends , sisters and women closer of the two families accompanying holding candles in their hands a kind of throne, where he sits down and covers her head with a red veil. 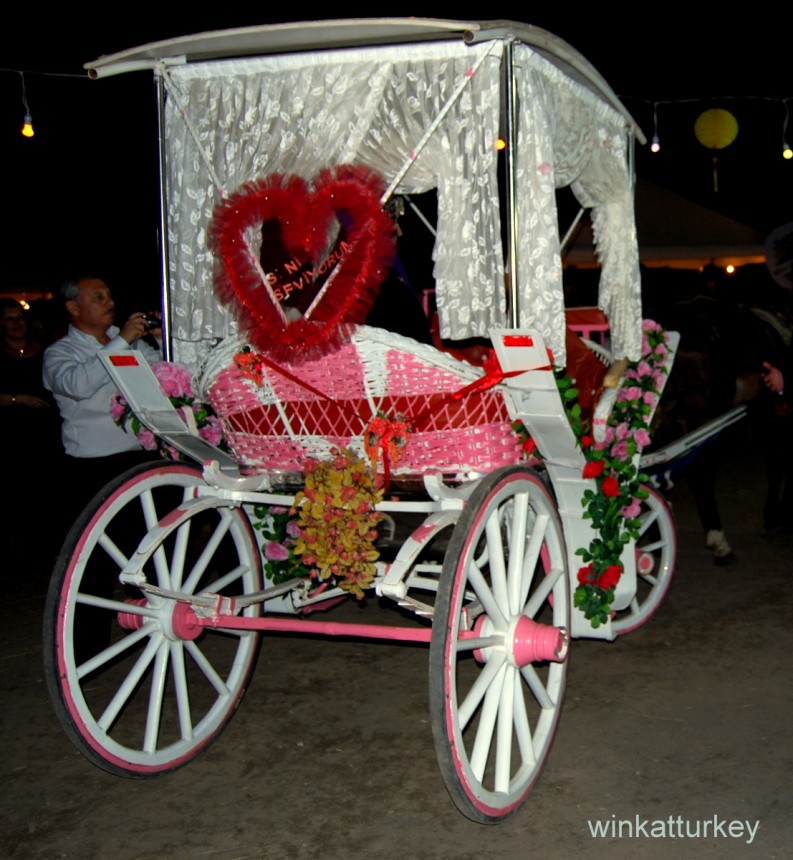 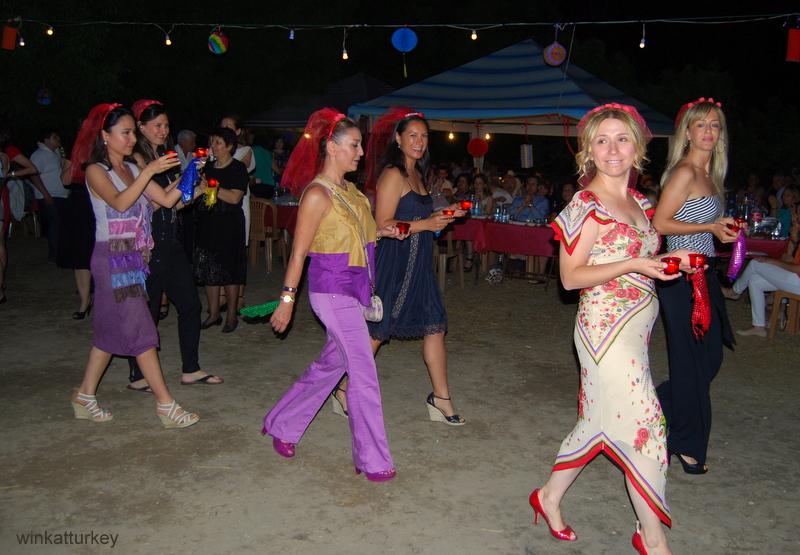 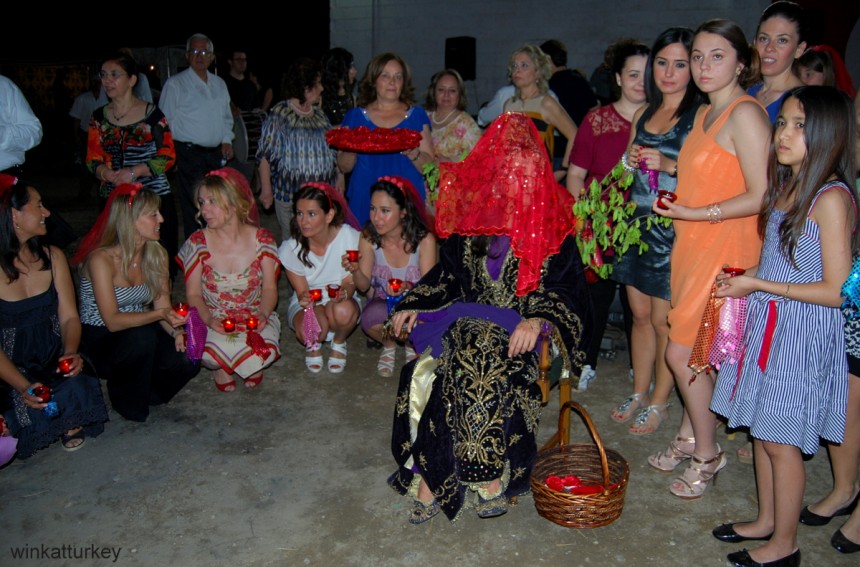 The ceremony continued as I already mentioned before, a happily married woman or the mother, in this case gold deposits in the hand of the bride, if this seems right hand closes and then begin to put henna on hand, while they sing special songs for this occasion. According to tradition, the bride must mourn for the marriage to be perfect. In this, the say, the bride did not cry.

After the henna is put in the hands of single and female assistants who wish. And he begins to dance Turkish folk dances like “Zeybek”.

Gifts are distributed among participants, some detail, eg boats at this event were distributed homemade jam. The party continues between dances, singing and laughing for hours.

Formerly this was the last day of the bride in her parents' house, but nowadays, the ceremony can even hold one or two weeks before the wedding.

Absolutely!, an event that if you have the opportunity to attend, you lose you should not.