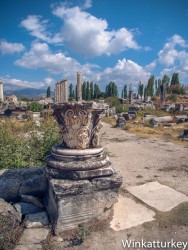 Any visit to Turkey beyond Istanbul has to include Cappadocia and Pamukale, two places where nature and human hands have collaborated to create unique environments. Si vamos a Pamukale, we can not pass by the ruins of Aphrodisias without stopping to see one of the most important schools of sculpture of the Roman Empire. The nearby marble quarry of excellent quality, He turned the small town, that was already ancient in the time of Julius Caesar, a place well known in the ancient world for his figures, reliefs and sarcophagi. The fertile valley of the river meanders around their cotton fields to the city of the emperor Augustus said: “of all cities in Asia, I chose this for me”. 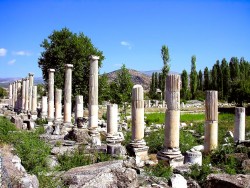 Of course, Aphrodisias was named after the Greek goddess of love. The temple of Aphrodite and excellent marble carvings deity created there, They turned the small town into a place of pilgrimage for centuries. They found numerous statues of Aphrodite of Aphrodisias in distant places around the Roman world. In addition to the representation of the goddess, other statues, Pictures, sarcophagi and architectural elements, They were sold as far away as Bea, en Portugal. Pilgrims visiting the temple disappeared when he became a Christian church and a lack of money brought caused the decline of the city, but the greatest damage to Aphrodisias were the devastating earthquakes in centuries IV and VII. Especially catastrophic turned the second of those earthquakes that occurred impaired waters and groundwater levels causing permanent flooding of part of the city. Paradoxically, He will be protected under the mud ruins vandalism. 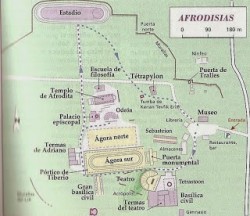 The route to visit Aphrodisias is circular and can choose to start on the right or left. Personally, I recommend doing it right to the end in the magnificent museum covered, must-see. If we travel in that sense we begin with the Tetrapilón, ancient and magnificent monumental city gate.

The Tetrapilón is a monument square with four doors, one in each of the facades. It is decorated with columns, arches, reliefs and friezes interesting. He stood in front of the temple of Aphrodite and was surrounded by forty columns. It was an impressive welcome to the pilgrims coming to town. 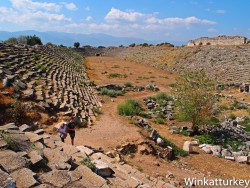 The Roman Stadium in Aphrodisias is the best preserved in the world next to Delphi, has 262 m long and 58 m wide. He had the capacity to 30.000 spectators and after the earthquake of the seventh century was remodeled to be used as a theater. Continuing our journey we reached the famous temple of Aphrodite. Built entirely of marble, It consisted of 13 columns on each side, eight on the main entrance and another eight at the opposite end. He was one of the most revered among consecrated to the worship of the goddess and rose on an older place that existed since ancient times. The statue of the goddess was found in the vicinity is exposed in the museum of the city. 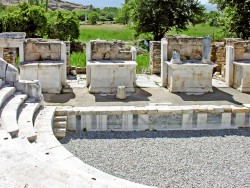 Next to the temple there is a small well-preserved that served to Odeon theater and also to host meetings of the Municipal Council. It is built with blue and white marble and had capacity for seven hundred thousand people. Leaving the Agora in the city on your left, we come to the famous thermal baths of Hadrian. They were fabulous public baths built in the second century. They had five galleries with columns and white marble pools. The mosaics, paintings and statues decorating the interior and today we can admire a statue of Apollo in front of one of the pools.

Continuing our walk we reached the large theater with seating for eight thousand spectators and ended with the temple dedicated to Aphrodite and Augusto, the Sebasteion. It represents the intent of the emperors of their power link with ancient mother goddess. There will contemplate two colonnades on two three-storey buildings rise with multiple reliefs and friezes. 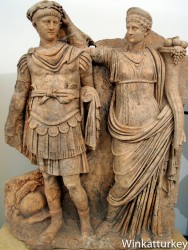 Finally we visited the museum where we can find a unique exhibition in the world of Roman sculpture in excellent state. In addition to the image of the goddess namesake city, We see all kinds of representations, reliefs and statues that adorned the buildings of Aphrodisias. If you have ever wondered where Roman statues that are in museums around the world, Afrodisias is the answer in many cases. In this museum you can admire many of the masterpieces of the artists who worked there.

Today we visit the ruins of Aphrodisias thanks to the work of Kenan Erim Tevfik, Istanbul archaeologist who devoted half his life to excavate the city from his professorship at New York University.