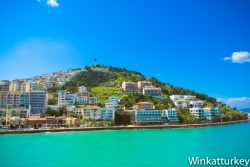 Kusadasi means “birds Island” and it is one of the best-known places in the Turkish Aegean coast. In addition to its numerous beaches and lively town centre, It is surrounded by resorts that offer a vacation at sea to remember. It is very near Ephesus and from Kusadasi you can take trips to Pamukkale, Aphrodisias the Izmir. Upon arriving cruise port visit during the summer and from there can take ferry to the nearby Greek island of Samos and Patmos. Those who enjoy shopping will also have their moment in Kusadasi, bazaar is one of the best stocked in Turkey, with all kinds of quality items brought from all over the country.

Like most natural harbors in the Aegean, Kusadasi was inhabited since ancient times. Many people lived there since 3000 BC and was successively occupied by Persians, Greek, Romans, Byzantines, Genoese, Venetians and finally, Turkish. Kusadasi was always in the shadow of Ephesus, the great capital that is about fifteen kilómetros.Tras World War was briefly occupied by the Greeks and later released by troops Mustafa Kemal. 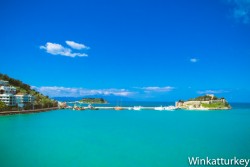 The Greeks called Ephesus Neopolis and the Genoese the refounded as Scala Nuova. Its current name is fairly recent, in the twentieth century began to be called as well for the small island of pigeons, There Guvercin, which it is actually a peninsula that is connected to the shore and where a Genoese castle stands. Sometimes, Turkish shorten the name and simply called Ada.

Kusadasi has a long promenade along the beach, It arrives at the port and then continues to accompany the rugged coastline that lies beyond the cruise terminal. The whole area is full of restaurants where we can find excellent quality fish, especially those found on the same port. You can also buy very fresh fish in the small market that is before Karavanserai, unforgettable crayfish and squid. 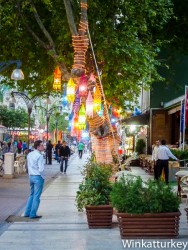 Precisely in Kusadasi Karavanserai bazaar begins. We offer the typical crafts of all bazaars of Turkey but also high quality items that are hard to find in other tourist areas. Carpets, lamps, engravings and furniture are in the streets of the great shopping bazaar that are mixed with other traditional positions. We may also buy imitations of all kinds, highlighting clothing, watches and handbags. Regarding prices, They are slightly higher than in the bazaar Kemeraltı bazaar, en Izmir. The presence of so many tourists makes vendors have been accustomed to customers with high purchasing power and is not easy to get bargain prices elsewhere. However, when the tourist season ends to November, you can find very good prices. 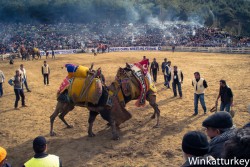 The city at night is lively, customers join the many hotels who rent apartments and local youth to fill terraces, bars, and discos. In the morning, Most people choose to enjoy the beaches or join one of the tours to Pamukkale, Ephesus or Izmir. To cite just a few of the most popular. If we have time, I recommend visiting the island of Samos, birthplace of Pythagoras. In winter there is also camel fights nearby a typical show of Anatolia, where huge camel race a special face in a party atmosphere in which people enjoy, bet, eat or buy souvenirs all day. 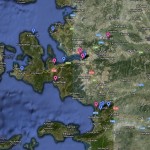 Cruise Kusadasi Bay and the island of Samos in the background