Located within the Aegean region, in the valley of the Menderes River and 20 km from Denizli is Pamukkale region. The tectonic movements that took place in the fault depression of the Menderes River Basin resulted apart from earthquakes, the appearance of multiple hot springs. Were these waters with a high mineral content, especially Crete (limestone form), that created Pamukkale. The water also contains large amounts of bicarbonate and calcium, producing the precipitation of calcium bicarbonate. It is this phenomenon that has been producing thick white layers of stone and travertine, extending in a cascade of frozen appearance, following the natural flow of water.

The training acquired forms of semicircular travertine terraces and collect water inside. The result is exceptional, a unique landscape in the world. It is precisely the aspect that gives rise to its name Pamukkale "cotton castle".

You can climb to the top of the mountain walk,

barefoot through pools, streams that flow throughout the journey and enjoy the beauty and originality of the place. Notice that varies according to sunlight, seems that the water of the pool changes color, if you can in the evening he perderos. Pressing the bottom of any of the pools, you'll notice that is a kind of slurry, plaster-like. Consider the option of taking a simple walk up, enjoying the beauty of the place or one can go bathing and soaking during the tour. The temperature of the water that falls forming travertine is about 33 º C, although in some areas it can reach 100 ° C. A recommendation, be careful in some areas, especially around the pools as they are very slippery. Once above do not fail to give them a bath in the old pool of Hierapolis, not think there is another equally. Not only is the water temperature of about 38 º C is a joy, but also the composition of it that makes notice how small gas bubbles will cover the entire body, and if you look like little pool bottom is covered with ancient remains of capitals, columns, etc.. So if you want to enjoy this special bath not to forget to put a bathing suit on the backpack. 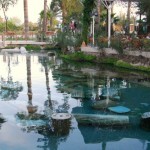 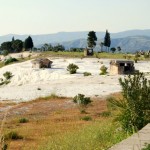 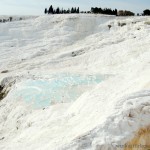 On top of the great cotton castle the ancient city of Hierapolis was built, founded around 180 A.C by Eumenes II, King of Pergamum. The city became an important center to which all the nobles of the empire came attracted by the medicinal properties of the hot springs.

The city suffered several earthquakes, they made had to be rebuilt, but it was one in 1354 which eventually destroying virtually the entire city.

Currently among the remains of the city we can distinguish:

Roman theater for more than 12.000 spectators.

Temple of Apollo of the Hellenistic.

Martyrdom of San Felipe: Octagonal shaped monument built in honor of Philip, one of the twelve apostles, that was supposedly crucified upside here (in 80).

Plutonium: A narrow cave of poisonous volcanic gases emanating, especially carbon dioxide. Formerly used by priests to suggestible people into believing they had influence over death, since every person entering these gases dying breath. Today, access to it is closed.

The pool of Cleopatra: An ancient healing thermal mineral water pool. Really peculiar because deep is full of remains of fluted marble columns.

There are two entrances to the complex, a top from which will access directly to Hierapolis and another at the bottom from which you have to take off our shoes and climb pools.

In periods of holiday feasts can get crowded, remainder charm to the place. Spring and fall are the best times to visit.

The village of the same name, unremarkable. Of course hundreds of small hotels with convenient access to.

See entry for Route of the Seven Churches of Revelation

View on map A nod to Turkey – Un guiño a Turquía