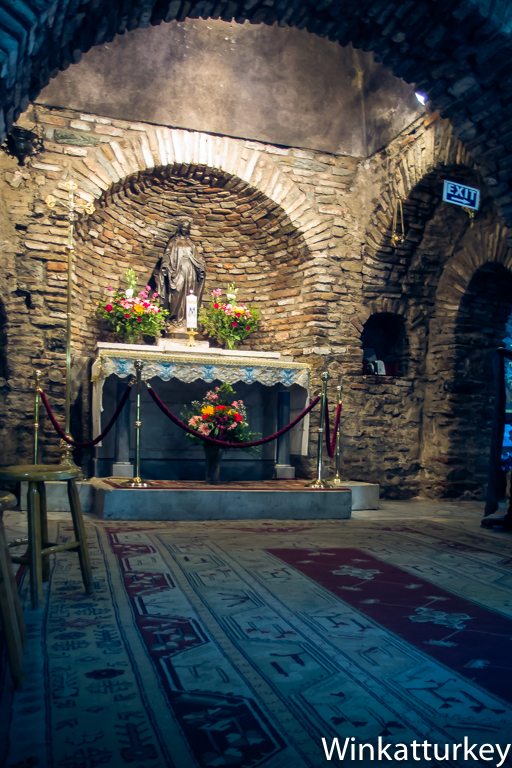 In the vicinity of the ruins of Ephesus we visit one of the holy places for Catholics, and was declared the house of the Virgin Mary by Pope Pius XII in 1951. The place is revered by both Christians and Muslims and the day 15 August pilgrimage to the place where everyone celebrates one of the few ceremonies where believers of the two religions come together in a more visible way. This is a particularly peaceful place to the arrival of tourists can not withdraw its atmosphere of respect and peace.

The veracity of the history of the house is based on the proven fact that documented San Juan lived in Ephesus the last thirty years of his life about. As is known, the youngest of the Apostles was the only one to be at the cross and there received the commission from Jesus to take care of the Virgin. It stands to reason that the Virgin accompanied St. John to the capital of the province of Asia and if that was so, there he lived until the Assumption.

The house was lost for centuries, but in the early nineteenth century a German nun named Sister Anna Katharina Emmerich known for his visions of the life of Jesus, described in detail where he had lived the Virgin. It was a house in the Turkish city of Ephesus, situated at the foot of a mountain, near a stream, overlooking the city and sea, stone, rectangular, with an apse and a fireplace. It should be mentioned that the nun had never been to Turkey and that their visions were accompanied by the appearance of stigmata that caught the attention of the Church.

To clarify the mystery, two priests were sent to the region to find the house Izmir. At one point in your search felt very thirsty and asked some men for a place to drink. They led to a small stream discovered in awe with him a small building that exactly matched the description. Later it was confirmed that he was a first-century house on which he had built a Byzantine chapel in the fourth century. In addition, they learned that Christians in a village near, descendants of the inhabitants of Ephesus, celebrated from time immemorial the rise of the Virgin to heaven from that spot.

The Church has never ruled on veracity of the house but the declaration of holy place and pilgrimage to the place of Pope Leo XIII, in 1896, and more recently Paul IV, Juan Pablo II y Benedicto XVI, give certificate of naturalization to popular belief. In addition, in 1914, Pope Pius X gave a plenary indulgence to pilgrims visiting the House of Ephesus.

To go to the house on our own, Selçuk we have to go and at the junction of the road from Kusadasi to Izmir next, continue south following signs. Then we turn right and begin to climb. By the way let the right road to the cave of the seven sleepers and pass in front of one of the entrances to the ruins of Ephesus. Mid-rise find a huge figure of the Virgin, striking presence in a Muslim country. We can stop by and watch the figure from there the valley and the mountains where it is Sirince.

When we got up there a checkpoint where we charge admission, Allowed no muzekart. There is a controversy between the city of Selcuk and the Church because the ticket money goes entirely to the municipal coffers that contribute nothing to the maintenance of the place. Anyway, yes tenths going to pray that, should not charge us but be compelling and speak English.

When we arrived at the entrance, see a post that gives the security Jandarma place and some souvenir stalls. If we want our money to go to religious caring Site, we have to buy in the small shop nearby house, before going down to the source.

On the way to the house are explanatory panels in many languages ​​and outdoor chapel right next to the house. Sunday's Mass at 10:30 English and is well known which is celebrated 15 August. Many Muslims come together as Christians and curiosity, when bread and grape communion to non-Catholics is partitioned so that they can be participants in the ceremony also at that time.

The house is small, with an entrance leading to the main hall in the apse find an image of the Virgin. It is very curious to meet people of different religions pray to the image, together to find Muslims and Catholics Orthodox Christians. At bottom right is the door leading to the bedroom, place in that, according to tradition, Lady fell asleep and from there ascended into heaven.

When we left the house continue to the source that is considered miraculous. People carrying water bottles and we can buy in the store before you get there and where to find a prized medals Virgin. Next to the fountain is a wall where people deposit their written requests in small roles.

If we complete the tour of the places associated with the Virgin Mary in Ephesus. Remember that the right of the entrance to the ruins are the signs that lead us to where Council was held in Ephesus in 431. In the debate between those who said that Mary was only the mother of Christ but not the mother of God and those who defended the divine maternity of the Virgin, Church was in favor of the latter.

Clearly, it is a special visit in a country that is best known for its archaeological sites, beaches and buildings from the Ottoman period.

View map of Izmir and alrededores