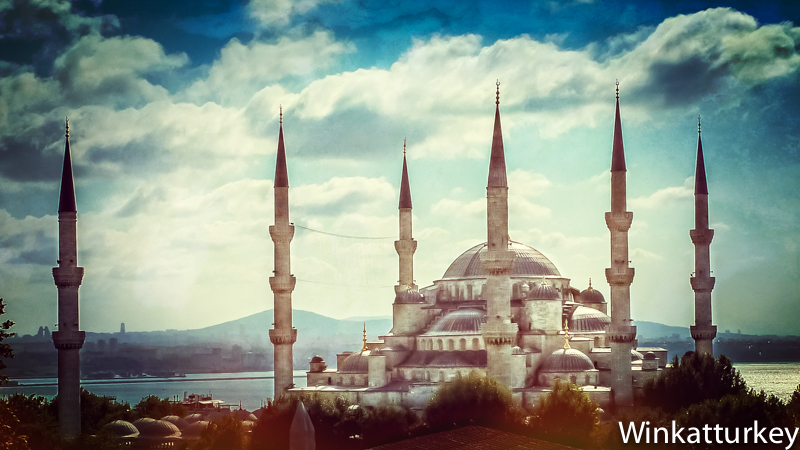 The last great mosque of the classical period Ottoman born with two major controversies. The Sultan had not won a major battle that deserved to be commemorated with a new mosque and this was not merely symbolic problem. At no victory, I had no loot to finance the work and money out of public coffers to the general disgust. The second was no less controversial. The new mosque was six minarets, Like Mecca, sparking criticism of the sultan vain. The Sultan Ahmet explained that his building had six minarets because its design required it without flinching, sent his architect to Mecca to build a new minaret and the holiest mosque of Islam remained the most minarets had.

Ancient polemics aside, Sultanahmet has become one of the most recognizable symbols of Istanbul. It is located in front of Hagia Sofia and both can dominate the entrance to the Bosphorus from the Marmara Sea. Its six minarets make it unmistakable but the harmony of the building outside which makes this building into something different. There is higher or greater than other imperial mosques and its dome is much smaller than the Hagia Sophia, but nobody can deny that the work of Mehmet Aga has a special magnetism.

The first time one contemplates the mosque immediate question is why they call it blue if gray? The explanation lies in the interior, 20.000 Iznik pottery lining the walls, including 50 Different designs of tulips. To avoid missing lighting, 256 stained glass windows open to the outside.

The building, which was built between 1603 and 1617, It is the culmination of centuries of Byzantine and Ottoman architecture. The central dome is supported by an ascending system 12 domes and rests on four main pillars inside. The arcaded courtyard of the Blue Mosque is as large as the interior. The whole is crowned by its famous six minarets, four of them are located in the corners of the building and the other two at the end of the great court. The latter two only have two balconies, while the others have three.

The mosque is located at the racetrack and when we entered the courtyard we see that the southeast entrance, has a huge chain that crosses. The Sultan was the only horse who could enter but the chain forced him to bend over so far to go and show your respect for the place. If we go from the racecourse, see before us a door intended for the faithful. Tourists must enter through the right side of the building. To pass you must remove your shoes or use plastic overshoes provided free. Women must cover their heads, scarves are also available for this purpose.

Inside there is an area for visitors and the output is on the opposite door. Immediately draws our attention to the richness of decoration, with its famous tiles and verses made by Seyyid Kasim Gubari, the best calligrapher of his time. The mihrab is carved marble and next is the pulpit. With the four pillars, The architect wanted to symbolize the first four caliphs and the dome depicting the prophet. The size of the pillars is criticized because it lacks elegance inside the mosque and called elephant feet. The lighting is complete with chandeliers hanging from the ceiling and in his time were decorated with gems and adorned with ostrich eggs to ward off spiders. The carpets are reset periodically and product donations are.

When leaving the building there is a box where we can make voluntary donations, the mosque is a place of prayer and the visit is free. Once out, find a plaza with benches where we can see the building taking a tea offered by street vendors. Some consider this place the true center of Istanbul, with stunning Hagia Sophia across. If we turn to the right after leaving the Blue Mosque, arrive at a shopping mall located in the rear of the monument takes advantage of the old outbuildings, the madrasa, el hospital, etc.. For those looking for something different visit, can plan your trip for the time of Ramadan, when the minarets are decorated with special lighting.

The famous Sultan Ahmet I will always be remembered for his mosque but did not live to look after their work. Ahmet died a year before the inauguration and his tomb is in the same building exterior.

View map of Istanbul A nod to Turkey