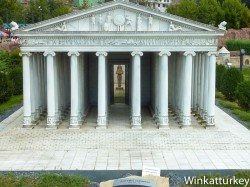 Two of the Seven Wonders of the Ancient World are located in Turkey, are the Temple of Artemis and the Mausoleum at Halicarnassus. If we add the Colossus of Rhodes, to 45 minutes away by ferry from Mármaris, almost half of those famous monuments are within reach when you visit the country. In fact, the ruins of these magnificent specimens of ancient art and architecture are very scarce but the visit is worth in all the cases, as much as what these places represent, as the tourist potential we find in the vicinity, including beaches, landscapes, culture, shopping and entertainment. 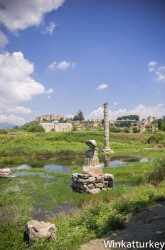 Scarce ruins entity makes many tourists pass through the vicinity of the Temple of Artemis without stopping. In fact, many organized trips overlook it though is less than two miles from the entrance to Ephesus.

Artemis was the daughter of Zeus and twin sister of Apollo. The cult of the mother goddess or Cybele is earlier than the Greeks time and in the place where the temple was built there were altars and small temples from long ago. The ancient temple was built around year 550 BC but it was destroyed by a fire caused by Eróstrato on 21 July of the year 356 to. C. 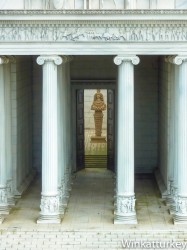 That was the night when Alexander the Great was born and it was said that the goddess was so busy attending his birth that she could not take care of her own temple. Remember that Artemis was also the goddess who protected women in childbirth. When Alexander the Great conquered Ephesus from the Persians, he offered the city to pay for the rebuilding of the temple but the Ephesians refused saying that a god could not build a temple to another god.

On the death of Alexander, the temple was rebuilt and turned out to be a monumental work that astonished who watched it. It was the largest temple of the ancient world and its 127 marble columns 18 feet high gave it a stunning look. Inside there was a stute of Artemis in gold and silver. 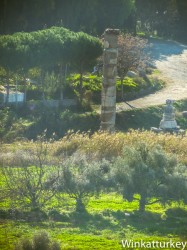 The temple rivaled in devotion whith that of Apollo in Didim and even it is mentioned in the New Testament. The importance and richness of Ephesus spread throughout the world the greatness of the temple. But none of this stopped the Goths in 262 when they razed the building. Then, the city had already moved to the new place that is visited today and Christianity had displaced the Artemis worship . The temple was not rebuilt but several of its columns were used to lift the Hagia Sophia.

Today the visit is free, and you can only see a column that emerges from a wet area. In the background you can see the Isa Bey Mosque and the remains of the Basilica of St. John. Probably the best place to remember the verses of Antipater of Sidon:

“I have set eyes on the wall of lofty Babylon, which is a road for chariots, and the statue of Zeus by the Alpheus, and hanging gardens, and the Colossus of the Sun, and the huge labour of the high Pyramids, and the vast tomb of Mausolus; but when I saw the house of Artemis, that mounted to the clouds, those other marbles lost their luster, and I said: "Lo, apart from Olympus, the Sun never looked on aught so grand".”