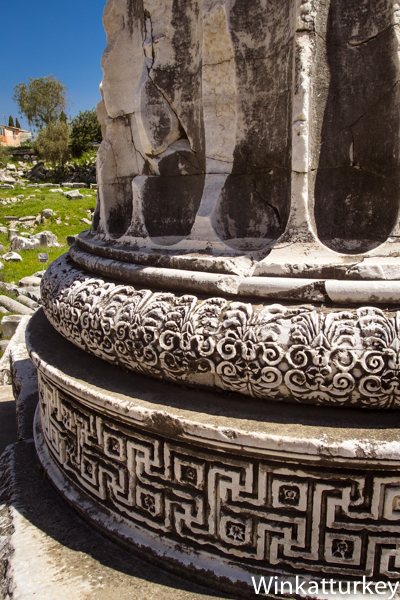 When speaking of the temple of Apollo in Didim, we refer to one of the holiest sites of ancient Greek world. The oracle that was there was the second largest after the great kings of Delphi and the temple treasures delivered from the sixth century BC. The temple was sacked by the Persians, but Alexander, oracle after hearing the great victory that awaited him, ordered the construction of a new temple that would have similar dimensions to that of Artemis at Ephesus, one of the Seven Wonders of the World. Although an earthquake destroyed the temple in the fifteenth century, is one of the great buildings of the best preserved ancient.

The place had a source that was considered sacred and priestesses drank their water to answer the questions asked to the oracle. The temple 118 x 60 meters and a height of remarkable 19,70 m. In fact, the building was never finished because of the high cost of construction. In an era in which a worker earned 2 drachmas a day, each column cost 40.000 drachmas and the building had 120 columns around the temple walls.

Anyone inquiring of the oracle, climbed the stairs leading to the entrance and accessed the gallery twelve columns from which you entered the temple. There he was received by the priests who took note of the question and the fees charged after making a sacrifice. The priest led the central courtyard to bring the question to the priestess of Apollo. Access to the yard is via two tunnels that go down to it and you can still go. After drinking the water of the sacred spring, Priestess of the oracle pronounced response was unintelligible except for priests. Suspected with water, emanating from the source gases that caused some hallucinogenic trance priestesses. Once the interpretation of the written response of the oracle, was delivered in writing to the applicant.

tra notoriety of this temple is that it contains the foreground of an architect retained. On the walls of one corner detailed building plan found, with drawings made with ruler and compass. Annotations include mathematical and geometric calculations, included corrections of perspective. The architect, aware that the work for generations prologaría, decided to stop this form plans for their successors might know the technical details of the project.

The visit also allows you to admire some of the sculptures of the frieze, among which a famous head very similar to that found in the monumental tank Constantinople jellyfish.

Didim is very close Priene and Miletos and is a must see with them if we go from Ephesus to Bodrum. We can also consider staying in some of the area hotels, with best prices in Kusadasi but well known beaches like Altinkum, in the village of Didim.