Miletos was a prosperous city on the Aegean Sea near the mouth of the Meander river . Its splendor was immortalized by the great men who were born there. Famous architects, philosophers and mathematicians took the name of the city throughout the world and continues to this day. If today we came to Miletos we will admire the remains of his fabulous theater, built 2400 years ago 2.400 with an amazing capacity for 25.000 people. 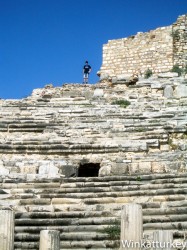 There are documents mentioning Miletos at the time of the Hittite Empire, in 1400 BC and the city was very important during the Greek period. Alexander the Great freed the city from the Persians and during the Roman empire it was visited by St. Paul. After shifting from Byzantine hands to the Turks, Meander river sediments began to clog the bay and the city was abandoned and in Ottoman times. Nowadays, the coast is located 10 Km of the remains of the city.

Miletos was the birthplace of the father of urbanism, Hipódamo ​​of Miletus, designer of the cities with parallel streets that are so familiar to us today. Also were born there Thales, the great philosopher and mathematician whose theorems about triangles continue to study our children today. The architect of the impressive Hagia Sophia was Isidore of Miletus, another son of the city that stunned the world. 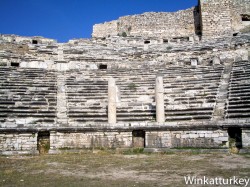 They all knew the theater that welcomes us when we arrived at the remains of the city. Although the facade of the monument collapsed centuries ago, the rest of the theater is quite well preserved. Accesses and vomitory are in use and they are very familiar to us because it is the same system currently used in stadiums and sports centers.

When the Greeks began its construction in the fourth century BC, it had a capacity for 5.000 people but it was reformed by the Roman engineers and expanded its capacity up to 25.000 people. Clearly, Miletos was a great city at the time and deserved a theater like this. The Roman reform enabled the place for gladiators wrestling. 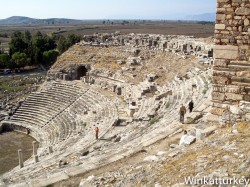 The theater has 140 meters in diameter and it still has a fantastic acoustic despite the lack of stage. From below we can see the columns that indicate the presence of the imperial box and climbing up the stairs we can see decorations depicting animal legs on the steps. Thanks to the inscriptions found in the stands, we know that there were areas for different groups of animators, even a section for Jews explains the importance that the city had in the early days of Christianity. 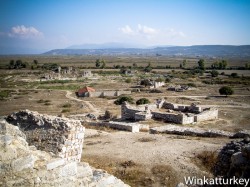 From the top of the theater we can see the ruins of Miletos, worthy for themselves a separate post. If we plan to visit Miletos, we can also visit Priene and in Didim.

View from the outside