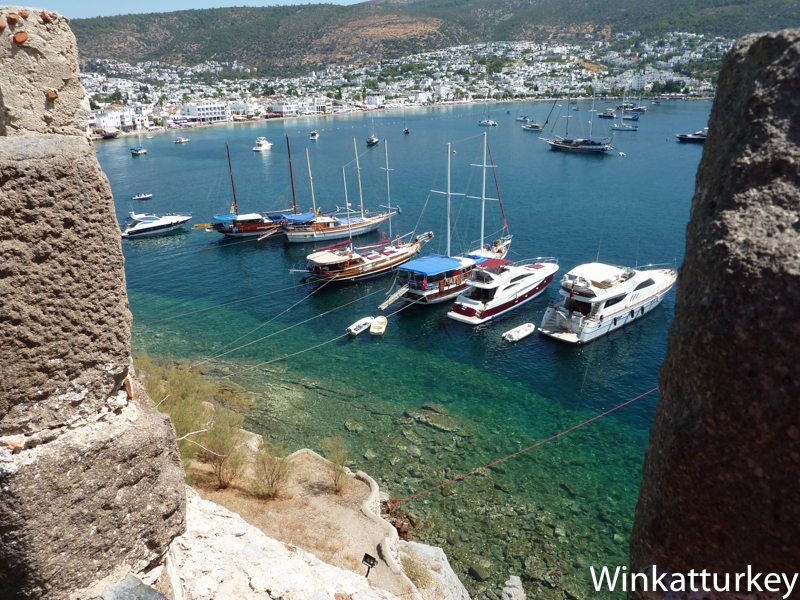 Bodrum is the place where the Mausoleum of Halicarnassus stood, one of the seven wonders of the world and is the city where he was born Herodotus, Father of History. From the center of the bay we contemplated the Castillo de San Pedro, built by the Knights of St. John at the time of the Crusades and which houses the Museum of Underwater Archaeology Turkish. Bodrum is a bustling seaside town with a marina full of spectacular boats. An essential place in the Turkish Aegean coast.

When the Greeks came to Halicarnassus in the seventh century BC, in place and there was a Carian city. Like almost all of Asia Minor, Persians passed hands and was at this time that the city ruled the satrap Mausolus. At his death in 353 AC, his widow and sister Artemisia decided to build a tomb in her honor would become one of the seven wonders of the world. The impressive building measured 45 meters high, columns had, friezes and statues, and was crowned by a chariot with the figures of Mausolus and Artemisia. The best Greek architects and sculptors of the time involved in its construction. Despite wars and natural disasters remained standing in front of the port city for nearly 2000 years ago, until an earthquake destroyed it in 1404. The Mausoleum gave name to the sumptuous funerary monuments. The ruins can be visited, although it is only a few remains of the magnificent building that there was no. However, exposure that explains the details of the memorial building on models and audiovisual very explanatory and lets sit down for a breather.

Halicarnassus was conquered by Alexander the Great and later became part of the Roman Empire and the Byzantine until 1071 came the Seljuk Turks. In 1402, the Knights of St. John received permission from the Sultan to occupy the city and build a fortress. The castle was built on a small peninsula that protects the harbor and the remains of the Mausoleum to build some of the statues and decorative elements of the Mausoleum were transferred to the castle were used and kept there. The Gothic castle chapel was built by Spanish knights and their names are written in the stones of the facade. The fort was named Fort San Pedro and probably because of this, the city began calling Petronium, from which it derives its current name, Bodrum.

When Suleiman the Magnificent conquered Rhodes, it was the capital of the Knights of St. John, the castle was abandoned and became definitely Bodrum Ottomans. In 1962 the Turkish government decided to restore the castle and stay there the National Museum of Underwater Archaeology. Visit the castle-museum is highly recommended because the collection of vases and objects recovered from the sea is outstanding. In addition, We can walk around the grounds of the castle, admire the remains of the Mausoleum there on display and admire stunning views of the harbor and the bay of Bodrum. As in some monuments in Turkey, care must be taken during our visit, especially if we go with kids, because some areas have no protection handrails.

Bodrum is a vibrant city with nightlife in summer surprises tourists unfamiliar Turkey. Some of the most famous nightlife of the Turkish coast are in Bodrum and the offer is completed with good restaurants along the harbor where we check the prices before deciding because there truly expensive local.

Tourists to be one of the many resorts that are in the bay of Bodrum should not miss the city. Besides everything already described, They can walk through the bazaar and look fabulous boats moored in the harbor.