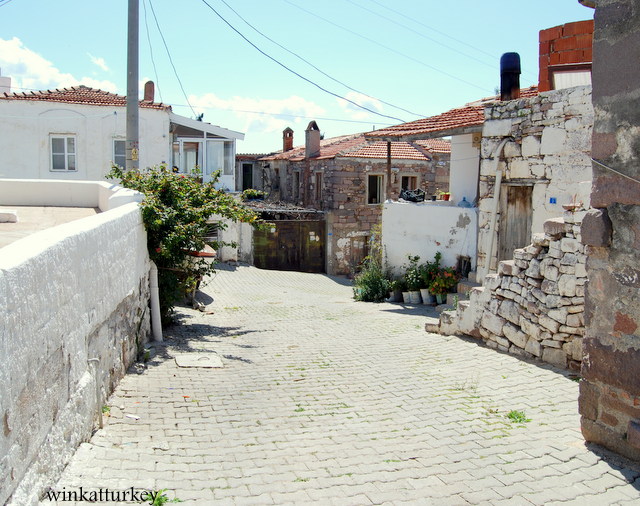 The truth is that when we decided to visit Ildiri we did not know that we would find, because the truth is that no one told us about this place before and none of our friends had visited it.

Located on the Aegean coast and belonging to the district of Çesme, about 22 km northeast of the city of Çesme, on a small peninsula that extends into the Bay of Eritrea, we find Ildırı, facing the Greek island of Chios.

On arrival we found a small coastal town, quiet and away from the hustle and bustle. We were in pring and the day was sunny and warm , what made us to enjoy the tour even more. The first thing we did was take a little walk near the sea and take some family pictures.

We left the small port and headed to the center of town, looking for some indication of Eritrea, that was what we had really come to see. 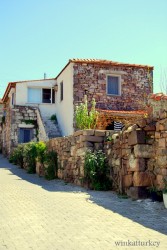 We found the village a very quaint and authentic place. Very different from the surrounding villages and showing clear Greek reminiscences. The construction is very peculiar, they even reused some building material coming from the remains of the ancient city of Eritrea.

Walking through the streets one can observe the daily life of the locals. The tranquility is absolute, sometimes broken by the barking of a dog or the sound of a bird.

Local people live from fishing and farming of artichokes and olives, humble and affable people.

There are a few seaview restaurants and bars very nice, where we can enjoy the typical turkish “kahvalti” or a delicious “gözleme” (a crepe usually stuffed with spinach and cheese or spicy meat). 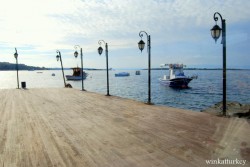 View from one of the restaurants 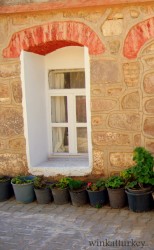 The village is crossed soon as it is very small, so after the walk through the streets and sit and enjoy after a great Kahvalti, which by the way we love the whole family, returned to the car to go in search of the archaeological remains.

The site is at the end of the village. Currently there 2 areas where excavations continue. An almost at the edge of the sea, which is not always open, in which it works remains of a Hellenistic villas and found that multiple tiles. Open only from June to October.

The other area is located to the Mount. The truth is that the site is not the

best preserved. The site was explored in depth by Professor Ekrem Akurgal in years 60. Great discoveries were made, but has since been somewhat neglected. Appears to be have restarted several archaeological projects currently working in the area.

The ancient city of Eritrea was one of the 12 cities of the Ionian League. Mentioned in many mythological stories and very important at the time for its trade with Egypt, Cyprus and Western countries. Also famous for its wine production, millstones and wood. It became an independent city in 334 BC when Alexander the Great conquered Anatolia and fell into decline in the Byzantine empire.

Many of the remains are covered by vegetation, but only for the beautiful

Views from the Basilica

views from which one can enjoy it rises to the top of the city, worth a visit.

Remains have been found in the city, that put its origin already in the Bronze Age. Its rise was in the Hellenistic and Roman period and its decline came with the Byzantine Empire.

The latest excavations have uncovered a theater of the third century BC, also remains of what was a city of the sixth century BC, parts of the temple of Heracles the V century A.C,a sacrificial altar and mosaic floors and villas (siglo II a.c). 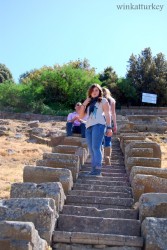 Remains of the theater in the city of Eritrea

Climbing the ladder of theater to the upper part of the city is accessed, it will find the remains of a basilica and the remains of an ancient temple of Athena. And best, the view across the bay, all the surrounding coastline and even the Greek island of Chios.

The statues and important remains found are displayed, mostly in the Archaeological museum of Izmir.

The visit was great because the course was beautiful, flowering trees, fields full of flowers and the colors and contrasts of the area made the trip to be special. 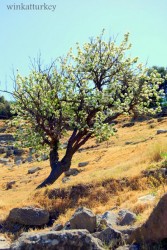 After the walk the girls were tired and starving so we headed to one of the restaurants there by the sea and the fish is super fresh to also enjoy a delicious meal: Grilled octopus “ahtapot izgara”, Some incoming “half”, a typical tiny shrimp in the area “çimçim”, lakes and delicious “local fish”.

With the stomach full and we took a little walk to go down the food and back to home.

We went there on our car, but you can get a bus to Cesme Ildiri from each 1/2 time from the Alaçatand the Illica .

Views from the Basilica

View from the Temple of Athena