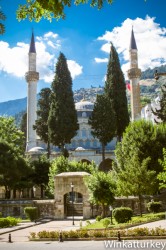 The crown princes of the Ottoman Empire were appointed governors of Manisa for their formation as future sultans. Thanks to this, the city has magnificent examples of Turkish architecture among which is the Muradiye mosque. It was designed by master Mimar Sinan but the construction was directed by Mehmet Aga, who later built the Blue Mosque. 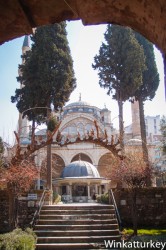 Manisa is 30 Km from Izmir and its province has some of the most visited places in the Aegean region, such as Sardis or Philadelphia, two of the Seven Churches of Revelation. However, many tourists miss this city whose foundation dates back to the times of the Hittite Empire, 1300 years BC. Outside of Magnesia of Sipilos, his Greek name, took place the battle of Magnesia in which Lucius Cornelius Scipio defeated King Antiochus III and conquered Asia Minor to the Roman Empire. 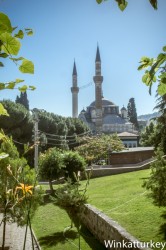 During the Ottoman period three cities were designated as the places were crown would princes will complete their training. Manisa was chosen, together with Amasya and Trabzon and therefore they were known as the cities of Shezade. Thanks to this, Those cities enjoyed greater attention and today they have a valuable heritage. Manisa stood out the three and there were born many of the Ottoman sultans who also ruled the city being princes, such as Suleiman the Magnificent and Murad III. Precisely the latter was who commissioned the construction of the Muradiye mosque. Therefore, it is a Sultan Mosque, although not in Istanbul. 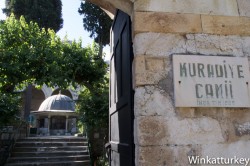 Manisa is a place near the mountains and forests are the stage on which Muradiye mosque is drawn. Actually it was a complex with schools and other buildings. Nowadays, one of them is the provincial museum of Manisa. The Muradiye is very close to the Mosque of Sultan, where Mesir festival is celebrated every year. .. 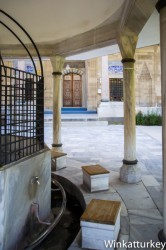 The building is surrounded by gardens and cafés where you can enjoy the peace and quiet despite being in the center of this bustling city. Contemplating the Muradiye wecan understand the reason for the choice of Mehmet Aga to be the architect of the Blue Mosque. It is a classic building, a dome supported by four arches that rest on lateral half domes in the style of St. Sophia. The mosque has two single balcony minarets and its pretty facade has a large porch with arches. On the sides of the entrance there are two Iznik ceramic murals with Arabic script. The whole is surrounded by trees and manicured gardens 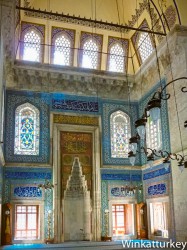 To enter, we go through the stone door that leads to the gardens and get to the ablution fountain that is in front of the main door. Inside there is a collection of Iznik tiles of the highest quality, comparable to those of the imperial mosques in Istanbul. Light enters the enclosure through stained glass. Not to be missed..

Once completed our visit, do not forget to buy Mesir Macunu and try the Manisa kebab, less known than the Adana kebab but quite popular in the Aegean.

Entrance to the Mosque Muradiye

Muradiye Mosque from the gardens

Gateway to the gardens

Facade from the gate of the gardens

Entrance door with one of the ceramic murals Izmik

Interior of the Mosque Muraiye

Mihrab of the mosque Muradiye