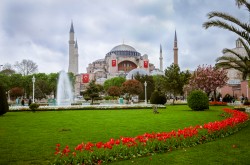 Hagia Sophia means Holy Wisdom in Greek and is the name of the largest Christian church that existed until the construction of the Cathedral of Seville thousand years later. Its magnificent dome remains one of the world's largest and, since its completion, Humanity took ten centuries to rebuild a similar dimension. With his Turkish name Aya Sofia, leads the monuments that make the traveler feel that Istanbul is a special place and get there takes us through the centuries by an experience that leaves a mark. 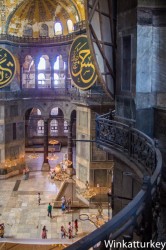 The current building is the third church to be built in that location. The first Hagia Sophia was completed two centuries before the adjournment of the present basilica. Both that cathedral as his successor were victims of terrible fires during riots in the Byzantine period. They promote your Santa Irene, which means Holy Peace in Greek, was completed before and hosted the headquarters of the Patriarchate until the completion of the great church. The current building was inaugurated with great pomp to the occasion demanded Year 537. It is amazing that the work lasted less than six years, especially if we consider that the Emperor Justinian bring stone quarries in the confines of the empire, including Greece, Syria and Egypt, as well as columns Temple of Artemis it from Ephesus. 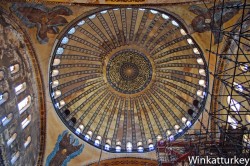 Hagia Sophia is a landmark architecture of universal and undoubted inspiration of Ottoman architecture. The monumental mosques Shezhade, Suleymaniye Mosque and Rustem Pasha You are directly influenced by the great design which used Isidore of Miletus. The giant dome 31 m diameter 55 meters high seems to float over the light entering through the 40 windows in its base. The weight of such a structure with four arches resting on four columns. In two of the sides, the dome is supported by two half-domes. For the curious, first used the scallops, spherical triangles which are located under the dome and allow this to rest on the arches. The scallops of St. Sophia are decorated with four cherubs. 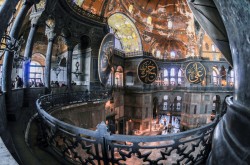 So bold design executed as far back was not without serious problems. A succession of earthquakes eventually demolish the dome first twenty years of its construction. The emperor ordered reconstruction Isidore the Younger, nephew of the original architect who understood that the first dome was too flat and built the present, higher. 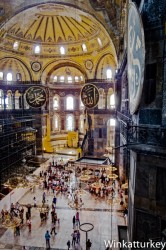 Hagia Sophia has had a long and eventful life. It was sacked by the Crusaders in 1204 those who became Catholic Church. After the fall of Constantinople in 1453, the building became Ottoman hands, which involved the conversion of the building into a mosque. In 1931 Ataturk, the father of the Republic of Turkey, ordered the closure to the public of the mosque to reopen in 1935 as a national museum. In 1985 UNESCO included the historic areas of Istanbul where Aya Sofia encruenta located in the list of World Heritage. However, the grandeur of the monument has earned him the respect and admiration of rulers, who along its millennium and a half of life care have also, restored and enhanced. 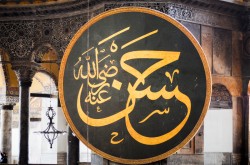 The beginning of Turkish rule was particularly dramatic. The cathedral was the refuge of those who could not contribute to the defense of the city, women, Children, elderly and sick were concentrated within the liturgy was celebrated while continuously throughout the siege. When the looting began, Ottoman soldiers broke down the doors in search of the great riches that were supposed inside. Priests rites continued until they were forced to interrupt, around, women were raped, the elderly and the sick killed and the survivors enslaved. Then, Mehmet the Conqueror ordered the immediate conversion of the building into a mosque. 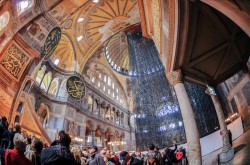 However, Turks cared, reinforced and magnified Aya Sofia whose general condition was deplorable. Houses around the building that were demolished were within 24 meters away and many resources were allocated to support. Mehmet the Conqueror himself ordered the first and much needed repairs which were continued by Suleiman the Magnificent, Selim II and especially. The latter deals Mimar Sinan, the great master of Ottoman architecture, consolidation of the building whose walls were beginning to show signs of fatigue. Sinan was also an expert in earthquake-resistant construction so its contribution helped Hagia Sophia has come down to us. He also completed the construction of the four minarets of the mosque, adding the two last. Other major restorations took place in the eighteenth, XIX, XX and currently. 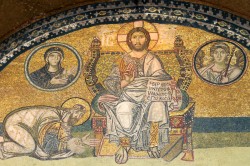 The conversion into a mosque supposed concealment most golden mosaics of the walls under a layer of plaster. You too, gorgeous floors were covered with carpets and medallions were hung with the names of Allah, Muhammad, successors and their first two children. A school was added to the building is now the museum's library and several fountains and tombs were built around. The conversion into a museum has tried to recover the mosaics keeping Muslim elements as the mihrab, said medallions, etc.. 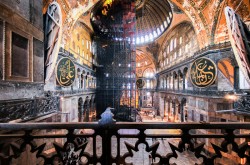 When we entered the Hagia Sophia we immense nave, that could accommodate a building 17 plants under the dome; right and left are two aisles. At the top there are two galleries where some of the best preserved mosaics. During the Byzantine era, these galleries were aimed at women, including the Empress, who provided his box there. They were also the position at which the most popular classes. 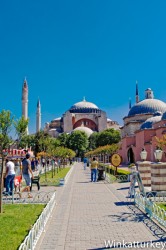 Hagia Sophia is easily identifiable when we arrived in Sultanahmet and gardens that link it with the Blue Mosque are the favorite place of many visitors to take pictures, rest and even take a çay contemplating the monuments. Muzecart allowed for entry. Hours are 09:00 to 17:00 in winter and 09:00 to 19:00 summer, one hour before closing longer allowed entry.

With thanks to Emilio Herrera García your photos