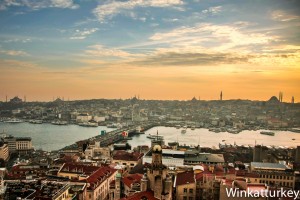 One of the places to visit in Istanbul insurance is the bridge between the two shores of the Golden Horn near its mouth. We will need to cross to get from the old part of the city's most fashionable neighborhoods on the European side. In addition, right at the end of Eminonu's Spice Bazaar, Yeni Cami Mosque and the Rustem Pasa. But the Galata Bridge is an attraction in itself, their views of the Golden Horn and the Bosphorus start with the Sea of ​​Marmara to the bottom, Flurry of ferries, Restaurants of the lower level and the multitude of people who constantly crossing it one of those moments not to be missed.

The current bridge is the fifth to be built there and across the Golden Horn from 1994. Prior to 1848 he passed in small boats and ferries linking the two sides in a constant movement of people, carriages, goods and animals. The dates of construction of the bridges are:

The current bridge was built by the Turkish company SFTA and has the characteristic of having a lower level where we can find many cafes and restaurants to sit while contemplating the landscape and the incessant buzz of boats. Measures 490 m long, with a light 80 m. and having 42 m wide. With vehicle lanes, tram line and sidewalks for pedestrians. 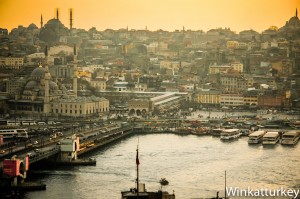 Anteriormete could cross the bridge directly from the forecourt of the Spice Bazaar and Yeni Cami but numerous abuses and installation of the tram, they forced the city authorities to build an underpass. Nonetheless, fools are still crossing above dodging taxis, buses and cars in a reckless exercise that we should not try. The underpass is a clear example of the Turkish mentality, where any small space is used to install a shop selling all kinds of goods, from toys and books to snuff or electronic. 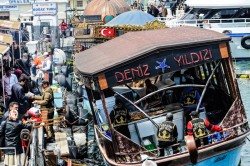 One of the boats where they prepare the sandwiches at the bridge. Photo of Emilio Garcia Herrera.

On leaving the underpass by the side of the bridge find the famous stalls mackerel sandwiches which are prepared in a boat tied up to dock. While many tourists flock to this place, Turks also like to go there because it is a cheaper option and they love to eat on the street. The stalls are open all day and We have posted a post on them. In the restaurants located on the bridge itself will find all kinds of options and prices. There are also some cafes that allow us to enjoy the unforgettable views. It is a good place for us pictures with imperial mosques in the background and the boats sailing by the Golden Horn. 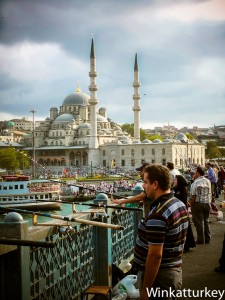 The tram stop is located next to Emimönü bridge, at the end of the ancient city, and is the same we use to go to the Spice Bazaar, the New Mosque or Rustem Pasha. In this area are the springs from which depart most trips on the Bosphorus. If we walk upstream of the Golden Horn, passing the snack stalls, arrive at the bus stop to go to Eyup, Bulgarian St. Stephen Church and Orthodox Patriarchate of Constantinople. Next to the bus stop is the line of the Golden Horn ferry. A true starting point for many of the views that we do in Istanbul. 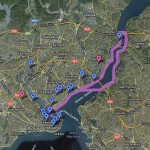 Yeni Cami from the bottom of the Galata Bridge

Snack stands near the Galata Bridge

Mackerel boats where snacks are prepared by the Galata Bridge

Fishermen on the Galata Bridge. Photo of Emilio Garcia Herrera 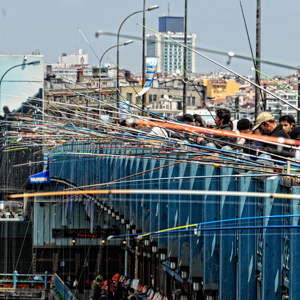 Article Name
The Galata Bridge Istanbul
Description
The Galata Bridge is one of the places where we can enjoy contact with city life. There is always a crowd of Turks and tourists mingle to enjoy the magnificent views from the bridge in the vicinity of some of the must see places.
Author
Jose