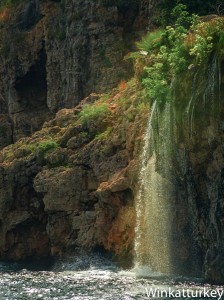 In the Mediterranean Sea there are few waterfalls which fall directly into the sea, if also seek which are located in a city, just find them in Antalya. Duden river waters coming from the Taurus Mountains and offer several waterfalls on the way to Antalya, are known as high Duden Falls and we must not pass through town in southern Turkey without visiting the green nature around them. But it is to reach its mouth where the river becomes Duden exceptional, his fall from 30 meters directly to the sea can be seen from the park surrounding the cliff and also from one of the numerous boats that cross the rugged coastline of the city from the old port.

The two options for the Lower Duden Waterfalls are recommended. The distance to the Duden park from downtown Antalya is about 8 kilometers, we can take a bus to go by taxi. You'd better ask at our hotel the best way to get. The park occupies the last two kilometers of the river and gardens along both banks we offer a very relaxing ride. On reaching the vicinity of the waterfall there lookouts to enjoy the views. On the right side, the cliff goes a little deeper into the sea, so the waterfall can be seen very well from there. Like elsewhere in the country, despite the handrails and guards, we must be careful with children. 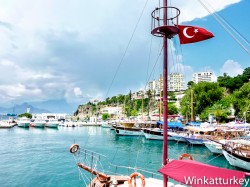 The second possibility to enjoy the falls is to take one of the boat tours departing daily from the Old Port. There are various times and prices, may be a good idea for a walk the day before to inform and choose what suits our plans. Some tours include a stop along the way to swim in the many caves under the cliffs. The refreshing waters of the Turkish Mediterranean are a powerful attraction in the summer months. 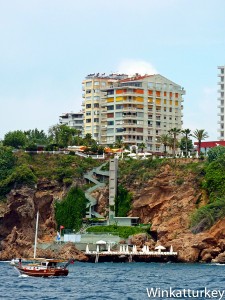 The journey takes just over an hour, more time to stop for the bathroom. It is impressive to see the cliffs of the east side of Antalya from our boat. At the top there are buildings and hotels that are literally hanging on 30 meters above sea. In some places there are platforms on the rocks where you can sunbathe and ladders also have access to water for swimmers. Some hotels have lifts for their customers down to the platforms and offer bar and cafe services, plus hammocks and parasols. Some also serve wharf and provide excursions, water sports and other activities. 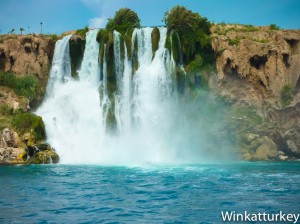 When we got to the falls is impressive height and flow, the river is regulated by some hydropower infrastructure in its upper part, during the summer so we can enjoy the show. Logically, Low spring much more water and waterfalls are even more striking. The boat approaches the waterfall and can take a beautiful pictures remind us that the tour. 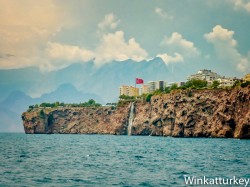 During our return we will look at the high mountains west of Taurus Antalya, another of the places we visit in our city tour. Beaches Olympos y de Phaselis, Mount Olympos with its cable car and the eternal flames of Chimaera ahead. The arrival to the old port, defended from attacks by pirates Hidirlik tower, ending a trip that takes about two hours and a half.

Park on the cliff

Arrival of ships in port

Stunning views from the ancient city of Phaselis

Return to the port to the Taurus Mountains in the background