Olympos was one of the six Lycian cities. It was located along a valley that ends in the sea at the foot of Mount Olympos. The city was abandoned centuries ago but today is one of the most famous beaches in Antalya. If you want to take one of those pictures of the Turkish coast where boats seem to float over the crystal clear water, in Olympos you will have opportunity to do so. 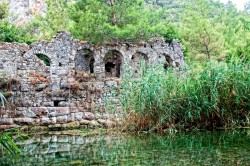 The city saw the passage of the Greeks, the Cilician pirates, Roman Emperor Hadrian and later the Venetians and Genoese, but in the fifteenth century it was vacated. The ruins have been excavated but not on our walk towards the beach can see Greek and Roman remains one of those combinations of history, nature and leisure Turkey offers often.

In the place where you leave your car find restaurants where they can also prepare packed lunches and then take them on the beach. The road to the beach is very nice, with the stream on our right and completely surrounded by trees among which poke some remains of the city. 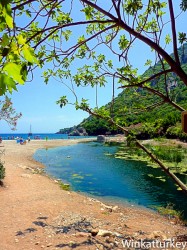 The beach is just over 3 Km and is sandy with small stones. At the southern end, there is a hill that forms a small bay where it is common to see boats at anchor. To go to that part of the beach we have to cross the mouth of the creek, that is the area where the water is clearer and there is less depth.

If we look back we can see Mount Olympos, Poseidon where he was when he heard the cries of the cyclops Polyphemus after Ulysses left him blind. From there, the god of the seas sent the curse that delayed the journey of Odysseus and turned it into a ten-year odyssey. Usually the top of Mount is covered with snow outside the summer months and there is a cable car that climbs to the top of its 2360 m. The sunset from up there is one of the most spectacular. 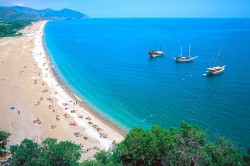 Another famous attraction in the area are the tongues of fire caused by natural emissions of methane gas in the vicinity of Cirali. On the nights visits are organized to the area to better admire the phenomenon. These flames arising between the rocks are the origin of the myth of Chimaera, the monster who threw fire and terrorized the Lycia region.

There are many small hotels and campings surrounded by trees in the Valley that leads to Olympos beach. Many of them are groups of wooden cabins where you can enjoy the tranquility of the area and are a good choice to stay. In recent years the Lycian route attracts many trekkers and the area of Olympos is one of the chosen to practice this sport through Taurus Mountains. From those accommodation you can start routes of varying degrees of difficulty and enjoy the scenery of the Turkish Mediterranean coast.