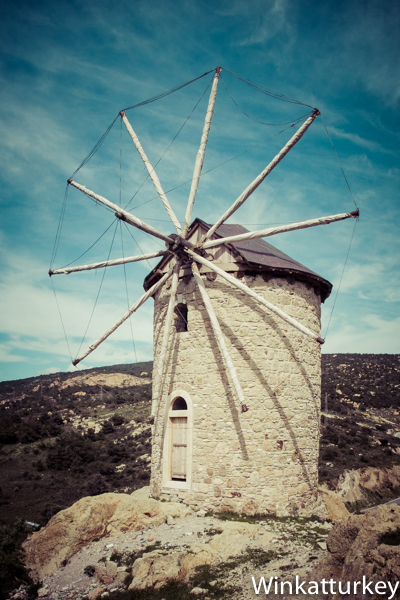 When Odysseus returned from Troy happened off the coast of Phokaia, where the Sirens lived with their harmonious songs that drew ships into the dangerous rocks and certain death. Fortunately, Ulysses was warned and had been chained to the mast of his ship plus cover with wax the ears of his men. This famous episode of the Odyssey succeeded 70 Km from Izmir in the beautiful bay of Foça. Currently, is one of three areas of special marine protection in Turkey, inhabited by one of the few populations of Mediterranean monk seals.

Phokaia was one of the 12 Ionian cities and their inhabitants were expert navigators. In his explorations, founded colonies in the Black Sea and the Dardanelles, sailed the Adriatic and came to Spain. The founders of Ampurias and Rosas were settlers from Phokaia.

During the Middle Ages, the city was Byzantine and Genoese. Its main activity was the production of alum, a mineral used since ancient times for water purification, tanning and dyeing fabrics. In 1455, Mehmet the Conqueror entered the Ottoman Empire.

Opposite the town of Foça are six islands and numerous rocky islets that gave the area its reputation but dangerous waters that give the bay spectacular beauty. The name of the city is due to the presence of seals in the area since ancient times. The islands are home to one of the last groups of monk seals in the world. It is estimated that there are only a few 600 copies distributed in isolated colonies from Madeira to the Aegean, of which only 20 would live on these shores. Needless to say it is very rare to see these animals achieve.

In summer there are boats offering a tour of the island and also visit some coves inaccessible from land. Among the islands include the Orak, Mermaids also called as the place from which lured unsuspecting sailors. Another of the most popular islands is the Ataturk, profile whose shape recalls the founder of modern Turkey to. Foça waters are known in the area for its cold temperature, phenomenon that is repeated in several places in the Aegean part of Turkey. Even so, the boat trip around the bay of Foça is a very good option if you find yourself in summer around Izmir.

Foça is formed by the ciudades, Eski Foça or ancient and modern or Yeni Foça, Founded ago 800 years where the alum deposits were. The most visited is the old city and in it are the aforementioned islands, Castle Five Doors and mills located on a hill at the edge of town. The journey between the two cities is one of those typical landscapes full of coves Aegean, peninsulas and islands that we will enjoy at any time of year.

The old Foça is a small town with houses in Greek style, lots of entertainment, trade and restaurants. It has two bays with a marina and other smaller fishing. About the latter we find numerous restaurants serving the catch of the day in front of the same boats that brought in the morning. Seated at the tables we can see the fishermen preparing nets for the next day.

The walk from the fishing port to the sport runs along a walkway outside the walls of the Castle of Five Doors, Genoese fortress that used the existing fortifications since ancient times and was enlarged after the Turkish conquest. Its interior is currently used as open air theater.

Besides the typical handicrafts and souvenirs, in stores Foça find the familiar places olives.

Mill at the entrance of Foça

Marina and the Five Doors Castle

Monument to fishermen of Foça