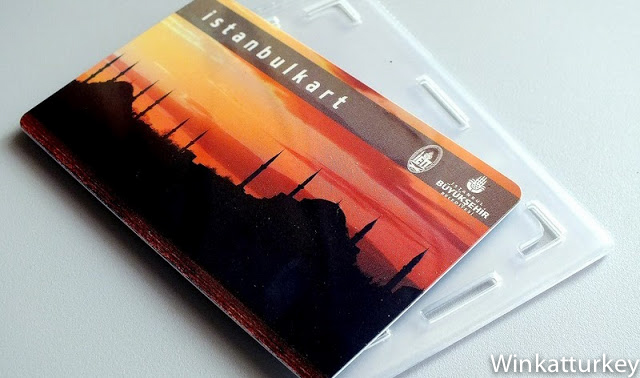 Many visitors use public transport to get around Istanbul. It is very convenient because it reaches everywhere at an affordable price. Even there are routes on which it is the best option, for example, if we want to visit the Asian side. However, the payment is complicated for tourists. Most transportation means do not accept payment in cash and we will need to acquire some tokens called jeton or use prepaid cards Istanbulkart or Akbil. This last option is the most recommended for its simplicity and because routes are cheaper. In addition, buses do not admit jeton

Akbil card is the former city transportation pass and for Istanbulkart the City Council wants a payment mean for the future that will also be valid for attractions, Culture and Leisure. For now it can only be used in transport so no practical difference between the two of them.

The best way to get the card is going to one of the thousands of kiosks and IETT desks (transport company in Istanbul) we can find elsewhere in the city, where we can buy it for 15 TL. If we are at the airport, the best is asking at the information desk, where they will indicate us the place where we can buy the card. When we buy it, the card has 7 TL and needs recharging. 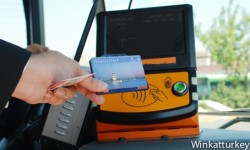 The card can be used for up to five people on the same bus, metro, etc. and each trip costs 1,95 TL. We can use our card in all of Istanbul Transportation, including ferries and the Istiklal Street tram. Taking transportation means consecutively, understanding that are part of the same displacement, only a reduced price will be deducted from our card . Second trips cost 1,25 TL. If we use the same card for multiple people, only the first one will get the discount.

To recharge the card there are machines in the stations but we can also go to the kiosks where they sell the cards. I would recommend the second option because you only have to give the card and the money to the seller so that our card is ready. For lovers of strong emotions, This is the machines recharging procedure. 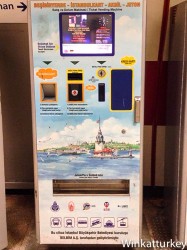 You have to put the card into the slot on the left and the machine starts to say “sadece kağıt para girişi yapınız”, meaning “enter only paper money” and keeps repeating until money is introduced by the next slot (“kağıt para girişi”). Once done, the machine will say “işleminiz yapılıyor, lütfen bekleyiniz”, meaning “your order is being processed, please wait”. Wait a few seconds until the screen turns green and says “akbil yüklemeniz geçekleşti”, meaning “your Akbil has been successfully recharged”. At this point you can remove the card. If you remove it before, it will not be recharged and it will return in coins the amount we introduced in notes.

There is a third payment way for public transport which are limited use cards. They are also sold in kiosks and IETT desks and there are for two, three, five and ten trips. If we will only use a bus, Metro or tram, may be this our best option though is not very common in that huge city.