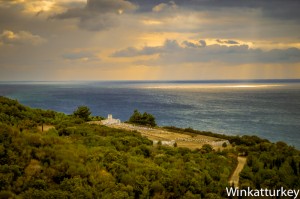 On the beaches and fields of Gallipoli peninsula a terrible battle was fought in 1915 , it had unexpected consequences, three nations remember those days as the birth of their national identity. Australia, New Zealand and Turkey itself would no longer be the same after fighting for the control of the Strait of the Dardanelles. The Turkish authorities wanted to pay tribute to the more than 100.000 men who lost their lives in Gallipoli and to that end, the peninsula, despite the beauty of its landscapes, has remained outside the tourist pressure. Of course, this is a visit that will not disappoint those who decide for it.

The battle took place as a result of the intention of the Allied Forces to take Istanbul and open the route towards Russia. At first they tried to force the passage of the Dardanelles Strait shelling the Ottoman positions by the heavy artillery from their ships. However, Turks managed to cause heavy casualties to the fleet with their mines and the initial plan had to be abandoned. It was time to use land forces that would land on the peninsula of Gallipoli and open the way to Istanbul. The slowness in the landing and in the subsequent progression, coupled with the effective defense that the Turks had designed, ruined the surprise factor. In the early days, a young Turkish Lieutenant Colonel named Mustafa Kemal he displayed extraordinary courage and outstanding leadership capacity. In fact, his actions proved decisive to stop the advance of Australian and New Zealand troops. From 25 April 1915 until 9 January 1916 bloody battles were fought in a trench warfare that ended with the Allied Forces withdrawal. Half a million casualties, including 100.000 killed, were the result of the campaign.

The visit requires at least a full day and the best time is spring and autumn. On April 25 ANZAC Day is remembered, a national holiday in Australia and New Zealand (ANZAC stands for Australian and New Zealand Army Corps) Around that date we have the busiest days in terms of number of visitors and therefore the prices, restaurants and shops are the highest of the year. To see the peninsula we need transportation, so hire a bus tour or rent a car are a must. If you drive your own car, guides that can be found in Canakkale or Kilitbahir who will accompany us throughout the day.

Before the tour we will see from Canakkale an inscription on the mountain on the other side of the strait which recalls the events of 1915. It is the well-known “Dür Yolcu”, the beginning of a Turkish poem whose first words are those written in the mountain meaning “Stop wayfarer, unbeknownst to you this ground you come and tread on, is where an epoch lies…”. Our visit will begin with the passage of the Dardanelles Strait from Asia to Europe. Ferry schedules are continuous and advance booking is not necessary.

Once on the European side, we will disembark at Kilitbahir, where one of the two fortresses built by Mehmet the Conqueror in the sixteenth century to defend the strait stands. You can visit the castle and also the modern defenses that played an important role in the naval Battle of Gallipoli. There you can enter the first museum-memorial where maps are kept, as well as photographs, dioramas, armament samples, equipment and personal effects belonging to soldiers of both sides.

Following the coast westwards we will reach the Turkish main War Memorial, it is the impressive Çanakkale Şehitler Abidesii or Çanakkale Martyrs Memorial. The monument presides over an esplanade with spectacular views of the Strait entrance from the Aegean Sea and there we will find the graveyards of most of the more than 55.000 Turkish soldiers killed in the battle.

Throughout the peninsula there are more than 90 memorials and cemeteries, so that the full visit is reserved to experts and enthusiasts on that topic. However, in a single day visit we can see enough to get an idea and also enjoy a trip that we will remember. Once we have visited Çanakkale Şehitler Abidesi, we can go to the bay of ANZAC or ANZAC Cove, where Australian and New Zealand troops landed , Nearby we can stop at several of the cemeteries. They are usually placed in very nice places and they are very well maintained. In the Allied cemeteries we can see the names, ages and military unit of the soldiers buried there. In the Turkish ones, the city of origin is also included.

Lone Pine is among the best known Allied graveyards. In 1915 Turks fortified the hill and only a pine was left standing on the trenches. After the fighting, when the position changed sides several times, the pine was destroyed but two Australian soldiers took some cones from its branches. Years later, seeds from those pine cones were planted by their wives and mothers in Australia, where trees that were born are respected as a symbol of remembrance to soldiers fallen at Gallipoli. In several places in Australia and New Zealand grow descendants pines from those trees. In 1990, seeds of these pines were brought back to Turkey and planted in Lone Pine Cemetery.

In the summer of 2012, Kabatepe museum was reopened to the public after the a deep reform. It is now a modern center where you can see exhibitions of objects from that time and also audiovisual rooms where the battle is told with spectacular realism. There are rooms with 3D projections, some of them even move simulating to be on board a ship. A visit for all ages.

The visit to the peninsula can extend as much as our interest in the subject wants, multiple stories of heroic acts, even places where you can visit the trenches in which they fought, form a unique space dedicated to the memory of the battle. In several places of Gallipoli we will find the well-known words of Mustafa Kemal symbolizing respect to fallen soldiers and reconciliation between nations. They were first said in 1934 when the president of the new Republic of Turkey addressed to a group of mothers who had come from Australia and New Zealand to see the place where their children were buried:

“Those heroes that shed their blood and lost their lives… You are now lying in the soil of a friendly country. Therefore, rest in peace. There is no difference between the Johnnies and the Mehmets to us where they lie side by side now here in this country of ours… you, the mothers, who sent their sons from faraway countries, wipe away your tears; your sons are now lying in our bosom and are in peace.. After having lost their lives on this land , they have become our sons as well”

In several places in Australia and New Zealand these words can also be read . 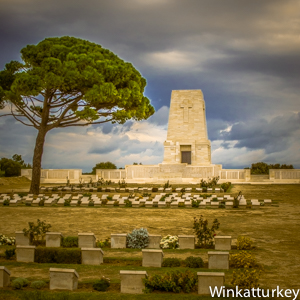