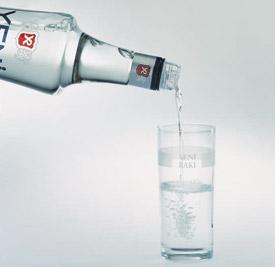 Many people think that the tea or even coffee are the most popular drinks in Turkey but the reality is that this place is occupied by a aniseed-flavored drink called raki. Turkish is written that way, with a dotless ı. Raki is very similar to French pastis, Greek ouzo or Alicante paloma. If at this stage any of our followers still thinks of Turkey from the usual stereotypes, he should know that the city where more raki consumed in the country is the very religious Konya, the capital of Sufism.

The origin of this drink is not certainly known, but the existence of other similar drinks throughout the Mediterranean suggests that it is quite old. Raki replaced wine during the nineteenth century as the most popular drink in the Turkish taverns to accompany starters, mezze. Nowadays, it competes with the rise of the beer in unequal conditions due to high taxes on raki because of its high alcohol content.

The traditional production of raki is made from the fermentation of raisins, but raki from fresh grapes or even figs are also popular. The fresh grape raki is higher ranking and more like the Greek ouzo. Closure of the state liquor monopoly favored the emergence of new varieties and brands, although Yeni Raki is the most popular still.

Raki is a clear drink that is taken with water and optionally with ice. Two small cylindrical vessels are used, rakı is served in one of them and the other with just water. Then water is added to raki as we like more or less strong. When we add water, raki turns from transparent into white. It is very important that both raki and water are chilled. If we take ice, we always have to put it after water. Drink first from the raki glass and then from the glass of water.

The raki is the traditional accompaniment of mezzo (starters) and we will continue with it when the main course arrives, most usually fish, but it can also be taken with any kebab, shish (brochette) o kofte (meatballs). Turkish mezzo culture deserves another post in the future, because of its variety and current boom, many of our recipes in our section Turkish cuisine are mezze. Simple mezzes that used to accompany raki were sheep cheese and melon, but any hot or cold mezze is a good choice. Personally, the fava, calamari (kalamar tava) and a fish are my favorites to take with raki.

In restaurants raki is not cheap and we should pay attention to the prices on the menu. Normally we will find the price of a single glass, doubled or also different sizes bottles that are usually the best choice if we are to take raki throughout the meal or we are several drinkers. Anyway, do not leave Turkey without taking a raki with some mezze, either in a tavern, a restaurant or at home.