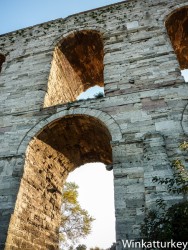 In 368, n 368, Constantinople was the only major city in the Roman Empire which continued expanding. Although the area surrounding the Bosphorus is very moist and full of forests,, springs and streams, the great metropolis needed water.. Engineers built a system of 400 km of canals and tunnels crossing ravines until the Valens Aqueduct, from it was distributed to more than a hundred cisterns scattered throughout the city.. The longest channel of the system is 250 Km long, it is the biggest hydraulic work of the ancient world and in words of the proper emperor, it brought to the sources and baths of Constantinople the water and the nymphs of the Thracian springs. 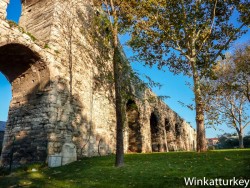 The magnitude of the construction meant that they were precise thirty years to finalize and they continued improving it for more than a century.. Along the route there are 30 Iaqueducts of various sizes, which have been able to reach our days thanks to the wildness of the area that are going through, even though it has also hampered their access and study.. The Valens Aqueduct is really the way to show the world the power of the Empire, they could have distributed the water through the city in a less ostentatious manner, but they decided to build an aqueduct 975 meters long that united the third and fourth hills of Constantinople.. 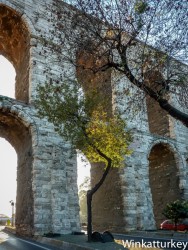 The water continued to flow through the aqueduct over the centuries and the successive rulers of the city maintained the system according to the possibilities of each historical moment.. Also the besiegers were aware of the importance of the system for the defense of the city and the channels experienced damages that were repaired with greater or lesser punctuality.. The capture of Constantinople by Mehmet the Conqueror increased the water needs of the city and the Ottomans extended the distribution system to the Topkapi Palace.. In the period of Suleiman, Architect Mimar Sinan built two new water lines that converged in the aqueduct from the Belgrade Forest, located north of Istanbul. To get an idea of ​​the capacity that the system had, in years 1950 still brought 6120 cubic meters per day.. 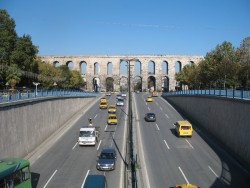 Today you can see a nearly intact section 625 meters long in the area near Suleymaniye Mosque just behind the Şehzade Mosque.. It has a maximum height of 29 meters and his foundations penetrate 6 meters under the current soil. It is formed by two rows of stone arches and has a width of eight meters. Today it is one of the main signs of the scarce Byzantine heritage remaining in Istanbul and together with Santa Sofia, the Basilica Cistern and the walls of Constantinople, record of the greatness of his time.