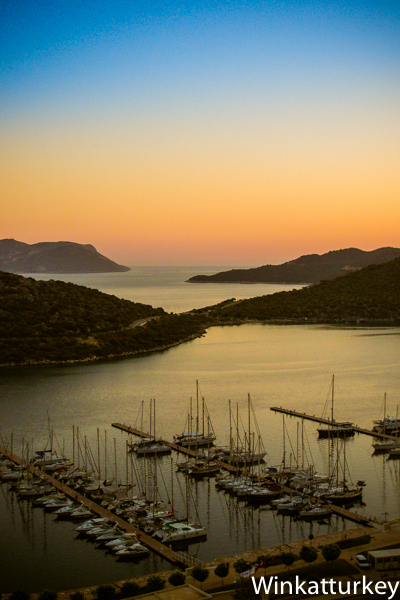 Located midway airport of Antalya and Dalaman, this fishing village became a tourist destination from the years 60 and 70 with the arrival of the first hippies and then to be frequented as one of the staging points required for yachts and schooners Walking the Blue Voyage along the Turkish Mediterranean coast. For location and geographical features, Kas has been kept relatively safe from the tourist transformation and retains the flavor of small coastal town, but offers numerous restaurants, shops and hotels with spectacular views of the bay of Kas, Teke peninsula and the island of Meis. Its proximity to the underwater city of Kekova, ruins Myra, Basilica of St. Nicholas in Demre and the enormous possibilities of trekking the route lycia, join their appeal to divers and sailors Kas to turn into one of the most desirable places in southern Turkey.

It seems that Kas has been inhabited since the Stone Age itself but the city was founded by the Lycians and result of this sarcophagi found around. The Greeks called Antiphellos and Roman times appears in the work Naturalis Historia of Pliny the Elder. After becoming part of the Byzantine Empire, suffered attacks by Arab pirates and all of southern Anatolia until it was conquered by the Turks. The population was always mostly Greek until the year 1923, exchange of populations caused the departure of all Greeks whose homes continue to provide its unique aesthetic to the people.

Kas offers spectacular hiking in the Taurus Mountains, scenario where the Lycian route and its breathtaking views of the rugged coastline runs at the foot of the mountains. But mostly Kas is a place to enjoy the sea.

Hotels are on the rocks and can be lowered into the sea by ladders and platforms that replace the few sandy beaches. Many hotels are spread along pretty Teke Peninsula and from there we can easily go into town by taxi, the dolmus bus.

Scuba diving is an activity that has grown in recent years and we can do a course or just rent equipment if you already have the relevant certifications. There are several dive centers that offer tours to many places in the area where the dives are especially attractive, with more than half a dozen wrecks to choose. We can even visit the wreck reconstruction Uluburum, a ship of the Age of Bronze whose findings are in the Museum of Archaeology Marína Bodrum. The marine fauna is very rich and among the rocks also find turtles due to the proximity of Kiddle and playa de Iztuzu, one of the most important breeding sites of the species in this part of the Mediterranean.

Every day depart from the port of Kas bay tours Kekova y a la isla griega of Kastelorizo (en turco Meis). The island is the most easterly of which belong to Greece and became very famous, especially for Italian tourists, there because the film was shot Mediterranean, worthy of an Oscar 1991. The excursion from Kas part around 10:00 and returns to the 18:00. The only hard drive 45 minutes we can spend the day strolling Kastelorizo, Shopping, enjoy bathing sites and eat at the restaurants offering Greek specialties.

Turkey's Mediterranean coast is one of the most desirable places in the country, if we decided to recorrerla, Kas acertaremos selecting one of the points where to stop and where do excursions around.