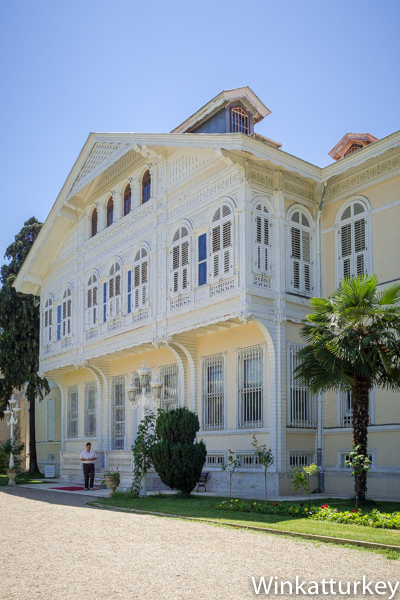 After the conquest of Constantinople, Ottoman sultans began residing in the Eski Sarayi, current Istanbul University. Then they ordered the construction of Topkapi palace known, Heritage of UNESCO, it was replaced as the seat of the court in 1856 by Dolmabahce Palace on the Bosphorus. In 1887, el Sultan Abdul Hamid II, looking for a better protected location, moved to Grand Palace Yildiz, the last of the imperial residence of the Ottoman Sultans. This luxurious place has the added attraction of being surrounded by the largest green space in the center of Istanbul. Located between Dolmabahce and Ortakoy is one of the great overlooked by tourists despite its excellent state of preservation and proximity to other areas often visited.

Since long before the imperial residence of sultans excursions liked this wooded area overlooking the Bosphorus and began to lift there hunting lodges and vacation homes. For this reason, Yildiz Palace is actually a large park with several buildings, the style of the rest of Ottoman palaces. Instead of building a building, the imperial family always liked to lift more complex with various buildings whose use changed over time. The Sultan Abdulhamid II distributed numerous buildings along the hills and valleys of the park, addition to their residence and harem, had ponds, greenhouses and residences for the service and the guard. He had also buildings for administrative purposes, a porcelain factory and some recreational pavilions, finally, there were two small mosques located outside the city walls.

What is now the museum visit as he leaves Yildiz's pavilion was built as the residence of the sultan and later expanded the occasion of the visit of Kaiser Wilhelm II in 1889. The visit costs 10 TL and do not accept Muzekart. Some of the buildings have been converted into restaurants and cafes with views of the gardens and the Bosphorus, although most are used by the City of Istanbul Yildiz Technical University.

He leaves pavilion is surrounded by a manicured garden and has two floors with over 60 Breakfast. It is built mainly of wood imitating a residence in the Alps. The visit is guided and repeated every 15 minutes with a guide who speaks English and Spanish. Throughout the visit, we can admire the luxury of the rooms and the superb furnishings, Abdulhamid II was fond of carpentry and very picky about the quality of the parts that were in residence, even some of the furniture is his work.

The ceilings with paintings and canvas panels decorated units to suit the nineteenth century are a truly remarkable visit. During the tour we will show pearly gates, porcelain stoves, balconies overlooking the gardens with the Bosphorus in the background, awesome rugs and lamps of all sizes and designs. The tour ends with the ceremonial hall, which is the largest silk carpet Turkey, its 440 m forced to tear down the wall to be entered into the huge room.

A recommended visit is not usually crowded with tourists.