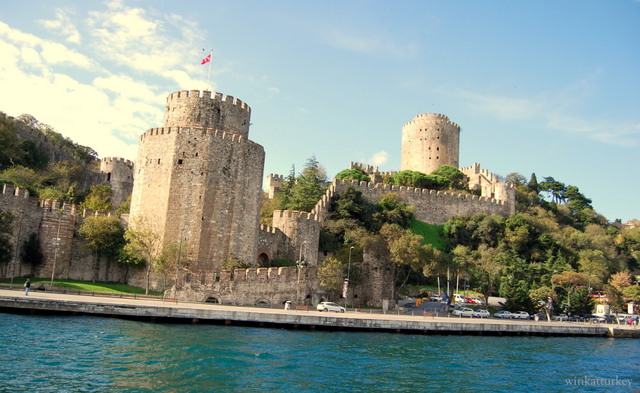 When Mehmet the Conqueror decided their final attack on Constantinople, realized that he had to cut off supplies to the city received from the Black Sea through the Bosphorus. A few years before, Sultan Bayecid I had a stronghold on the Asian side of the narrowest point of the Bosphorus and Mehmet decided to build another in front of the first, llama Rumeli Hisari, which in Turkish means Cground splintered Rome, by encontrase on the European side.

Getting to the castle to be erected on the shortest possible time, decided to allocate to each of his three pashas (general) constructing a tower. The competition was fierce and the fort was completed in four months time surprising. In addition, to encourage their workers, Mehmet decided that the plant would strength the shape of the first letter of the Prophet Muhammad. As the name of Sultan also begins “m”, construction was also a tribute to himself. Construction began on 15 April 1452 and finalized the 31 August.

New Castle had a devastating effect on the besieged Constantinople and supplies were completely cut. With their guns located in the tower that is closest to the shore of the Strait, the 400 Janissaries of its garrison were not allowed passage of any vessel. Constantinople fell 29 May 1453. After the conquest of the city, the military utility of the fortress virtually disappeared and became employed as a customs and prison until its restoration and opening to the public in 1960.

As Rumeli Hisarı is built on the closest point between the two sides of the Straits, in 1988 there was built the second bridge over Bosphorus, called Sultan Mehmet the Conqueror. The view of the fort towards the Black Sea can admire the majestic bridge and all die set a very photogenic.

When visiting Rumeli Hisarı we have to be cautious when climbing to the top of the walls and towers, because security measures are limited and in many places there are no handrails.