We went to Eskisehir were attracted by its reputation as a university city and also by its well-known meerschaum handicrafts. But the city immediately draws the attention of the visitor by the care of the streets, by its spectacular parks, by the gondola rides in the beautiful Porsuk river and by the best Ottoman neighborhood we've found in Turkey. Most of its colorful houses are restored and in use, forming a truly striking surroundings. Walking through its pedestrian streets and squares, shopping at the Atlihan meerschaum figures market and visit the Kursunlu mosque , we will make us enjoy our visit to this beautiful country town in Turkey.

The Ottoman houses were traditionally wooden but continuous fires drove them to integrate other materials. They are two-story houses where the main is the top floor, being lower for service rooms, guests, etc.. They usually have a back yard and normally they lack basement.

A particular feature of the districts of Ottoman houses is the colorful streets, each house is painted a different color. Throughout Turkey Ottoman houses are found, although many are in poor condition, uninhabited and have lost their colors. That is not the case of Eskisehir. From 2006, Eskisehir City Hall began to promote the restoration of the houses located in Odunpazari and neighbors began to return and to open new stores, coffee shops and restaurants.

Besides walking the streets, visit some of the houses open to the public and sit down to take a drink, we should take advantage of our visit to the neighborhood to know the Kursunlu mosque and buy meerschaum figures at Atlihan market .

Kursunlu mosque was built in 1525, in the time of Suleiman the Magnificent. Although it is attributed to master Mimar Sinan, it is believed that it actually was one of his associates who built this magnificent complex. Besides the mosque we find a small hospice, a kitchen with dining area and a caravan inn. Everything is surrounded by firs and cedars. Some of the units are used today as a craft market and we also find a workshop where you can see the production of glass figures.

In Eskisehir are located the world´s biggest meerschaum deposits. This soft and porous rock is actually named sepiolite, it has many applications but in Eskisehir it is mainly used to make beautiful pieces of craftsmanship. Pipes are worldwide famous, but all kinds of figures and accessories are also produced. Although meerschaum natural color is white , here we find pieces made with dark stone and even caramel color stone. The Atlihan market has two floors full of meerschaum objects shops where surely we'll find something we like. In most Turkish bazaars we can find meerschaum pipes, rings bracelets, etc but you should know that some are not made from original stone, but from powder compacted with resin. If something is too cheap it is logical to doubt about its authenticity. In the Atlihan bazaar there are pieces of the two qualities and it is written if whether or not they are stone made . 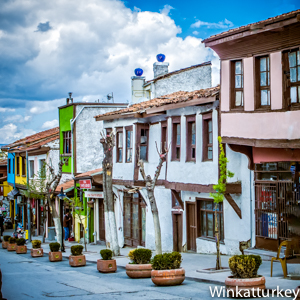 Article Name
Odunpazari. The Ottoman district of Eskisehir.
Description
One of the best preserved Ottoman districts of Turkey is in Eskisehir. Odunpazari offers a pleasant walk during which we also know Kursunlu mosque and buy in the largest city meerschaum figures market , Atlihan.
Author
José