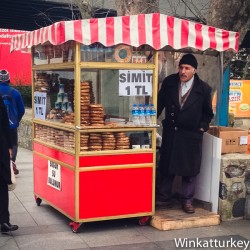 If you have been to Turkey, You've seen those breads. Simit vendors are everywhere, either in their carts painted red glazed or carrying large trays of tasty crowded round loaves covered with sesame. Also found in coffee shops and the most important Turkish fast food chain called Simit Sarayi, where we offer elaborate ways of eating and accompany. The Turks take simit at all hours, especially in the morning, and the low price of a lyre in our power to know why: They are delicious. 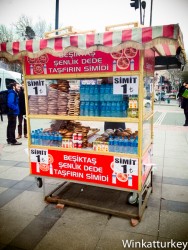 There is written evidence that Turkish simit consumed since the sixteenth century, when a judge Istanbul reflected in a sentence measurement and weight should have a simit. The simit part of the Ottoman culture almost from its origins. When the time of breaking the fast during Ramadan arrived, Sultan delivering a simit soldiers standing guard in his palace as a symbol of gratitude and respect. This hobby of the Turks by the circular loaves ago today that we find in many parts of the former Ottoman Empire, including the Balkans and some Arab countries.

The simit has different varieties and local tastes do you have small differences depending on where we test. They can be more crispy or more tender, be more or less toasted, be slightly larger or smaller; They can even be known by another name, and Izmir, where they are called gebrek. But they are inseparable from a genuine Turkish breakfast and difficult to resist when mid-morning walk down the street. 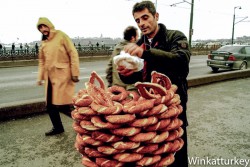 The most common accompaniment is a little cheese, but we can also take it with fresh tomato, peppers or small, generally, with what our imagination tell us. Of course, the çay, Turkish tea, He is a regular companion. However, the most common is to buy one from a street vendor and go our way while we revel in one of the most popular forms of Turkish culture, eating on the street.