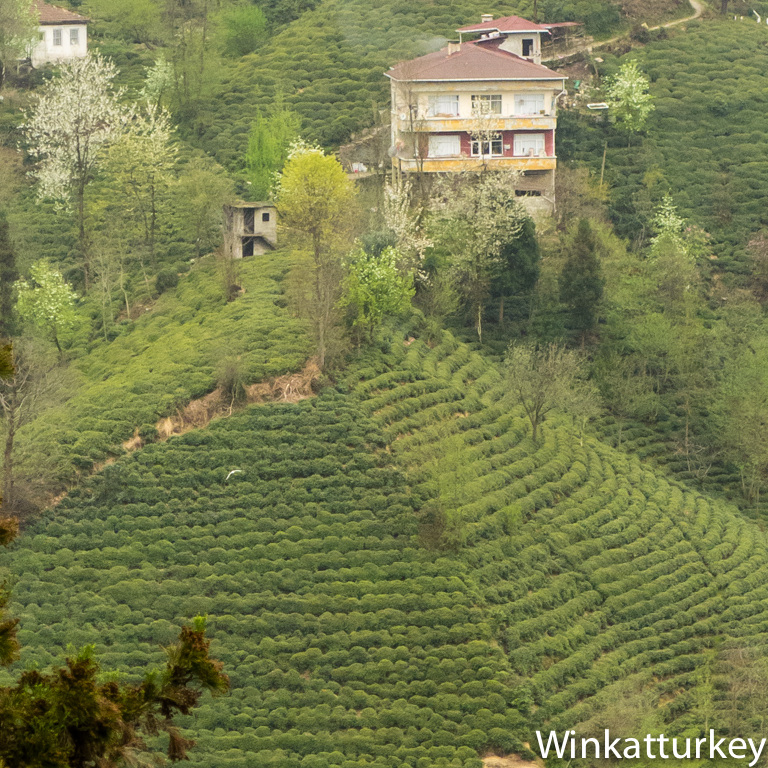 The landscape of the Black Sea coast is one of the most amazing and beautiful that visitors can enjoy in Turkey. The high peaks of the Pontic Alps, Kaçkar en turco, are a short distance from the coast and form a region where green is the absolute protagonist. It is a very wet area and valleys that penetrate inland wooded that reach the Caucasus. It was in this region bordering Georgia where the Turks finally managed to fulfill his desire to grow tea. In the city of Rize and surroundings can see the unique landscape of the tea in which the whole is produced is consumed domestically, one of the first consumers and global producers.

Traveling to the east coast of the Black Sea in Turkey has many attractive, from the city of Trabzon Sumela Monastery, to mention a few of the best known by tourists. However there are those who visit such sites but remain a few kilometers to contemplate one of the largest tea producing areas of the world, Rize region. If we travel by car from the Trabzon coastal highway will see the first tea fields even before reaching Of, where the exit is to go to Uzüngol. From ahí, to our right we will be accompanied by fields that descend to the same side of the road, a few meters from the sea.

Once in Rize, find surprise people even tea grown in the gardens of their homes. Arguably the small town of less than 100.000 inhabitants is part of a vast tea plantation. Just left the center and we see houses surrounded by fields you. A good view is what can be seen from the tea house that the company has Çaykur south. It is in an elevated position and from there we can see Rize on the Black Sea in the background and surrounding plantations. The place, well as the offices of the state-owned producer of tea, also has a small museum where you can learn the process of growing and processing the leaves, and a small garden with a planting for which we can walk. There is a cafe to sit and enjoy a Turkish tea in the same place where it occurs.

The Turks had always had coffee but in the twentieth century began to seek a region where you can grow tea. At first they tried in Bursa, off Istanbul, but today populous city did not meet the necessary characteristics for plant growth. The Russians had managed to cultivate tea in Georgia, on the Black Sea and the government of the young Turkish Republic thought he could be a good way to develop the area of ​​Rize, then very poor and backward. After various studies and unsuccessful attempts, production began in the thirties and was spread around the area thanks to government support and growing interest showed by the Turks Drink. The coffee had become an expensive and difficult to obtain product, so throughout the country began to widely consumed tea. The tulip-shaped glasses, Turkey's national flower, became common in the streets and homes around the country. Today Turkey is one of the leading consumers of tea, to the extent that you can just export despite being one of the top five global producers.

Throughout our tour we will see the tea growers picking leaves between fields, carry back baskets Rize very characteristics that we can buy as a souvenir at the local Bazaar and also in Trabzon , there are different sizes. Of course, not lose the opportunity to buy tea, is highly recommended and the organic variety that can be found in supermarkets in the country but that was previously difficult to get out of Rize. In closing paragraph of memories, not forget the tissues, tablecloths, etc. made of red fabric, black and white women from ethnic Laz, ancient inhabitants of the area. But surely, the best memories that we will take those green hills covered in mist are the best known landscape Rize.

Tea plantation along the road from Trabzon to Rize

View from the seat of Çaykur Rize

Garden plants you in Rize

Rize in the fog