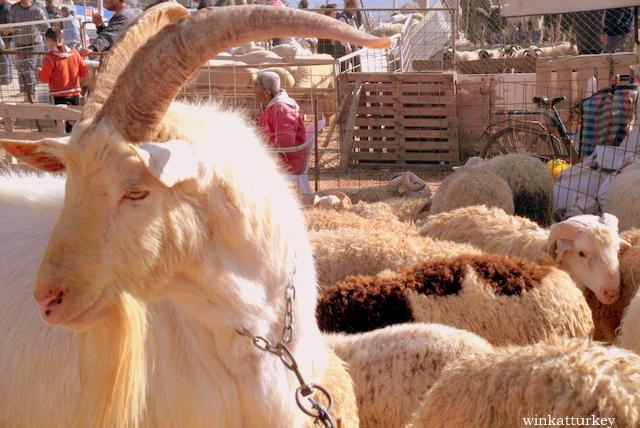 This week is celebrated in Turkey and in all Muslim countries called "Eid al Adha" or "Eid al Adha", which can be translated as "Celebration of Sacrifice" and in Turkish is known as festival of sacrifices. This year's celebration began 14 October and continues until the day 18. It is the largest celebration of Muslims, commemorating the passage contained in both the Bible and the Koran, on the willingness of Abraham to sacrifice his son Ismael as an act of obedience to God is shown, before God intervened to provide a lamb and that this animal sacrifice instead.

The festival takes place on the 10th day of Zilhicce or 70 Seker days after Bayrami .

This religious celebration is the most important for Muslims, is the equivalent of Christmas for Christians. It comes with the offering of an animal sacrifice, generally a vaca or a cordero, as an act of gratitude for saving the life of Ishmael, son of the prophet.

Are 4 or 5 national holidays. It is also during this period when the annual pilgrimage to Mecca is.

The movement of people within the country is relentless, family visits and family holidays make a hotel breakthrough occurs and huge traffic. If you plan to travel to Turkey at this time it is recommended that all bookings are made prior.

Another aspect to consider is that these days ATMs run out of cash available, so it is very advisable to get cash before the start of Bayram.

This year the festival has begun on 14 October with "arife" (preparation) and continue until the evening of 18. The most important day is the day following arife. This day trades and even monuments and museums are closed.

If the family budget permits, a lamb or a calf is purchased for sacrifice. The sacrifice is made in the morning of the first holiday, Later after preparation. Today the sacrifice is carried out, In most cases, with the help of a butcher or slaughterer. According to Muslim traditions 1/3 Meat should be cooked immediately at home by the owner of the animal, 1/3 must be distributed among the poor and the last 1/3 between neighbors and relatives.

There are authorized to make a sacrifice of animals in fields areas outside cities. A week before the start of the festival and can be seen in the villages these dedicated to the sale of cattle for slaughter areas. But the truth is that if one travels the country will see any of these sacrifices even roadside.

The truth is that these days families gather and organize large meals. Are 4 excesses days, food and drink (rakî), also typical sweets and chocolates as lokum are frequently consumed.

Not only beef and lamb are slaughtered. The animal that a family can afford depends on your economic status. Wealthy people buy a calf that shared between family, employees and needy people. The most humble people settle for what they get and what they buy are some parts of the animal. You can also eat other animals like goat and camel.

To eat these animals have to respect the same age. Goats and lambs minimum 1 year, calves, cows and bulls minimum 2 years and minimum camels 5 years ago.

If you have the opportunity to share a table these days with a Turkish family, not desaprovechéis. It is a unique opportunity to see one of the most important traditions. And, course, never refuse food, It is a gesture that did not like them.

I have to thank my friend for letting me Antonya some of the photos of the livestock market in Urla.