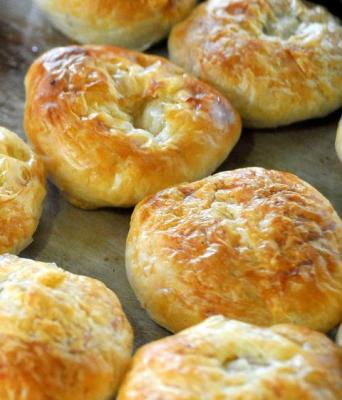 The bolloz are some typical pasta Izmir found in bakeries and street vendors throughout the city. The people of Izmir like taking them with tea, preferably for breakfast and also during the morning. After more than three years living in Izmir, My friend told me that William came from Spain boyoz when Sephardic Jews arrived in the city. This sparked my interest in the history of boyoz many times I've taken in the morning, curiosity increased when I learned that even today, one of the most famous bakeries to buy boyoz is run by Sephardic Jews and serves specialties like boyoz two espinaka or dulse also bimbriyo.

Although beginning to be seen in other Turkish cities like Ankara and Istanbul, los boyoz (pronounced “boyós”), They are one of the culinary peculiarities of Izmir. This is a puff piece that can be stuffed with spinach, potato or eggplant and zucchini ratatouille, although the most popular is the simple boyoz, unfilled. In case anyone wants to deepen the roots of this Spanish recipe, brought by Jews and adopted by the Turks, here you can see the receta in lengua Sephardic, is a stuffed potato variety that is not easy to find in Izmir. The Sephardic roots boyoz are well known by the people of Izmir and it is a sign of quality of an establishment when he announces that the worker of the house learned to make himself the boyoz of Avram Usta, a known master baker who had Jewish establishment in Kemeraltı.

On the streets of Izmir are stalls where you can buy the most popular boyoz with accompaniment, cooked eggs. Of course, can also be purchased at almost all bakeries, but the two sites are the most traditional Patisserie d'Oret and classic Alsancak Dostlar Firini. The first is in the Talatpasa Bulv. Not:64 and is run by Oret and her husband David. The second is located in the central pedestrian street Kibris Sehitleri, at the corner of the street 1469. Both are in the heart of Alsancak and separated by ten minutes walk in the traditional district of the city. You have to go in the morning to enjoy your freshly made specialties.