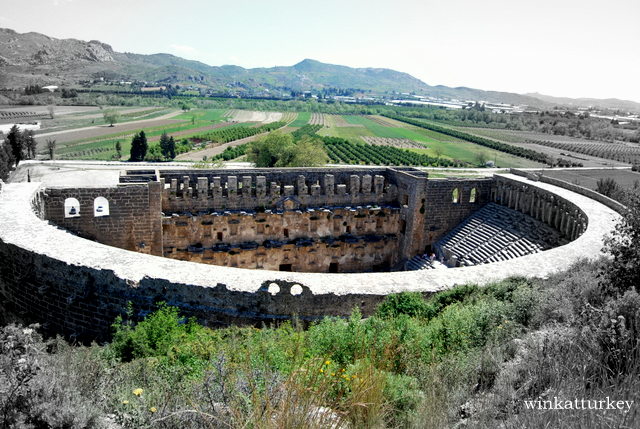 A few 45 km east of the city of Antalya, capital of the province of the same name, located on the Turkish Mediterranean coast western, is the ancient city of Aspendos. Known worldwide for its spectacular theater, one of the best preserved Roman world, built by the architect Zenon during the reign of Emperor Marcus Aurelius.

Located on the banks of river Köprüçay, city ​​Aspendos was founded in the pre-Hellenic period by colonists from Argos, in ancient Pamphylia. It was an important economic and cultural enclave. Mints its own currency and silver in the V century BC. In the V and IV centuries BC the name of the city was Estwedya, which was the name of an ancient Hittite king of the region.

In the V century A.C. belonged to the confederacy of Delos. At the end of the year 334 a.c. subjected to Alexander the Great. After the death of this city was built in the kingdom of Pergamum and then incorporated into the province of Asia in Roman times.

In the V century AD the name of the city was Primopolis.

The city was divided into two parts:

– Top of the city: It contains the Agora, Basilica, Buleterión and the monumental fountain, none of them surprising and theater.

– –Top of the city: In this part we find the Theatre, Stadium, Roman baths and a major aqueduct.

The theater has a capacity for 15.000 people and has a great sound. Today hosts major concerts, festivals and even competition wrestlers oil.

You have to look, especially, in the stage, that is the most impressive part of the theater.

Every year from mid-June to mid-August a festival of opera and ballet is celebrated. The show is amazing.

Aspendos is also the starting point on the road to San Pablo.

Wear appropriate clothing and shoes for walking in the countryside, as the area is not paved or prepared to walk comfortably. Access to the theater is simple and convenient, but if you want to explore the rest of the city, will be what walking through field, yes enjoy the beautiful scenery.

In summer it is very hot and in the shade there is virtually, so it is very advisable to wear some kind of hat.

Within the city there is no place where you can buy food or drink. At the entrance is a place in which they sell water and soda, expensive but we. So do not forget about lugging a water bottle.

On hot days to avoid the midday, the heat can be unbearable and it is regularly overcrowded. 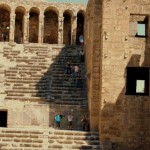 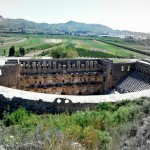 View of the theater from the top of the city 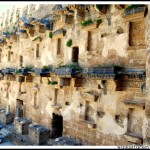 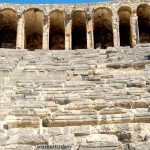 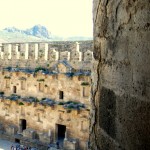 View from the upper tiers of the stage. 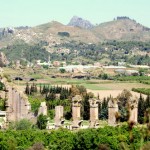 Remains of the aqueduct