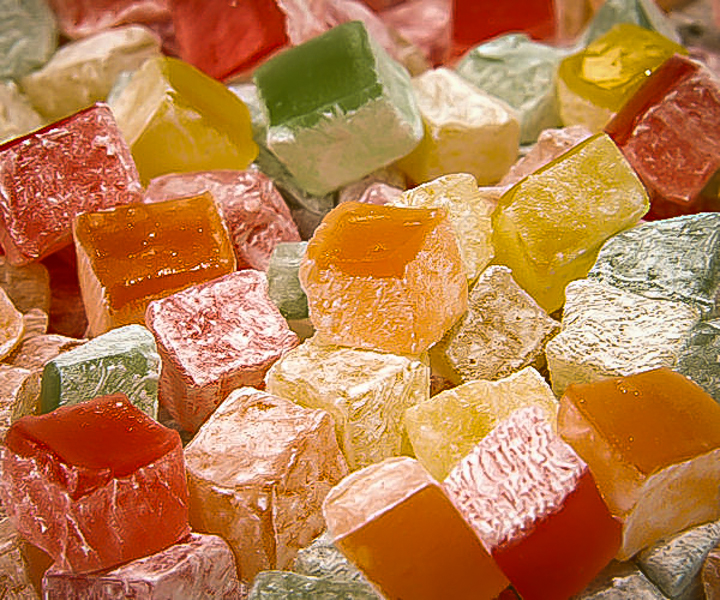 The lokum Ottoman is a traditional sweet that has its origins in candied fruits brought by the Arabs. In the late eighteenth century lokum began to be produced in its current form. They are similar to the Spanish jellies, are prepared handmade in pastries and we can find them stuffed with all kinds of nuts. In the nineteenth century a British traveller bought several boxes to sell them in London and since then lokum are known worldwide as Turkish Delights. The practice has become popular among tourists and lokum is one of the memories that almost everybody takes when leaving the country. In 2005 lokum global sales multiplied when the movie The Chronicles of Narnia, Edmund Pevensie not resist the craving for these sweet and so was deceived by the White Witch.

The Lokum type is a sweet fruit flavored soft. The simplest take the form of dice floured or icing sugar. Over time there have been many varieties, especially stuffed with nuts of all kinds. Now there are stuffed with walnuts, almonds, pistachos, hazelnuts, etc and we will find new ways, on all round or even an inner spiral pattern. Coatings is another party in sweet pastry that Turks have shown their imagination, Today we can see lokum coated pistachio, coco o chocolate, among many other variants.

In all positions bazaars where we'll sell lokum. These are very interesting places so colorful merchandise vendors placed carefully so sweet result as pretty as tasty. In these posts we can buy lokum for travel and ask to put them in boxes. In all Turkish cities there are more than a candy that is famous for its lokum, there are even national chain stores that have stores across the country. In these places we will sell lokum weight. We just have to ask in our hotel or our guide to tell us a recommended wherever we are. If we have left to the last minute, lokum also found boxes in the airport shops are not sweet but obviously artisans.

The Turks are very sweet tooth and is common to put a lokum accompanying us to coffee or çay (The) But if there is a time of year when consumption soars lokum party is the end of Ramadan, el Fitr. Children receive mountains of sweets as gifts and of course, no faltan los lokum, either prepared at home or bought pastries favorite family. If we want to serve them as they do, we have to buy small metal trays with a conical cap covering the candy. The find in all the bazaars.