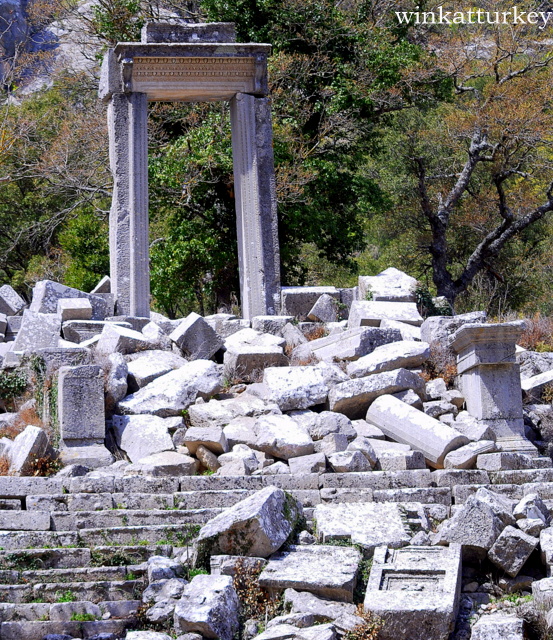 Situada a 1050 meters, on a plateau between two peaks of the mountains are the remains of Gulluk town of Pisidia are Termessos.

Famous for su impregnability as strength, both natural and artificial.

A city that surprised by the height at which it was built, access it is not easy, we can only reach it by walking nature trails for a while.

Are needed over 2 hours walking to reach the top, so one can get an idea of ​​the difficulties that would have to access it once.

It appears that the city of Termessos was founded by Achilles. Its first inhabitants were the solimanos, antigua anatolia comunidad.

And its inaccessibility was due to the main road that crossed a narrow gorge ran, could be defended by a few men.

In 334 A.C Alexander the Great came to the throat, but he saw that he could not take the city and continue their march, but before leaving he burned all the olive groves belonging to the city.

In the third century BC the city became Hellenized and have tens of thousands of inhabitants.

Rome became a sovereign currency and issued until the time of Emperor Severus. The Senate gave independent status in the year 70 ac in appreciation of their alliance in the war against Mithridates VI.

Its decline began in the V century after an earthquake destroyed the city and made it was abandoned.

The monuments of the Hellenistic and Roman period are still visible.

Once we get to reach the top, We can observe a spectacular theater, built on top of the mountain top and with stunning views of the Taurus Mountains. His capacity for more than 4200 sleeps. Absolutely!, the greatest attraction.

Amazing place that is built

We can also observe the grave Alcetas, an officer of Alexander the Great pursued Year 319 a.c for Antigono I Monoftalmos, fled and committed suicide in Termessos.

There are other very interesting remains as the walls, the Triumphal Arch of Hadrian, tanks, the gym, el now, el odeón. Tombs scattered around there are also countless, some extraordinarily decorated like those of Agatermeros and Lion.

They are one of the most impressive ruins, protected by a lush forest, home to countless animals and protected bird species. A place to enjoy nature and the grandeur of some works of man.

Once we arrived at the nature reserve, have to walk more than 40 minutes to reach the city. The journey along a path that offers unbeatable views of the natural park is. It is therefore necessary to resort to this visit with appropriate footwear for hiking, bring water and a snack if possible. The visit will take us a minimum of 2 to 3 hours.

As was the case formerly nature continues to protect the city and is surrounded by dense vegetation and virtually hidden. The Royal Road or King's Road is almost impossible to see because of the large vegetation. All this makes this park a unique place in the world.

-Driving: The ruins of the mountains shall reach Gulluk following Antalya-Burdur highway (11km) y en dirección a Korkuteli 14 km then see the sign indicating we Termessos.

Open every day of the year.

Amazing place that is built