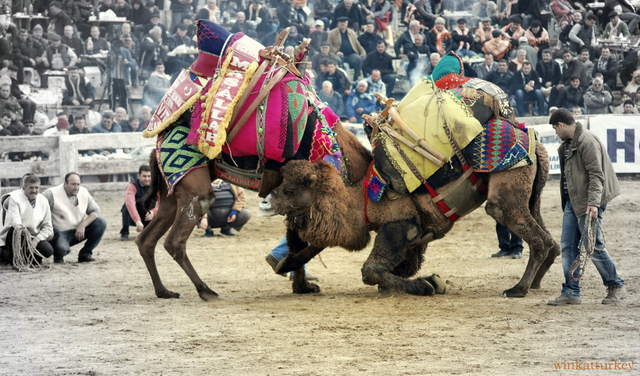 An excellent opportunity to immerse themselves in Turkish culture is to attend one of the popular and traditional wrestling camel or "deve güreşi." Are held in different places in Turkey, but it is on the Mediterranean coast, and especially in the Aegean region, where they are known. The dates are in autumn and winter, as it is this time which coincides with the period of estrus females.

The camel wrestling practiced in this region since ancient times. Although more than 2000 years old, it is not until 1980 when the Turkish government began to support these competitions as part of the historic Turkish culture.

Camels taking part in the competition are a mix of two different breeds and are called camels “tülüs”. Males fight in response to the zeal of a female camel, which is close to them.

During the fight using their necks as a counterweight to force their opponents to fall. They also try to bite in the legs and hit sharply. Although it may seem somewhat violent, the fact is that this sport is governed by ancestral rules. A group of referees presence close fight and fourteen “urganci” are about to separate the animals with cords if necessary. One of the camels is the winner when the other dropped or avoids confrontation.

It's really a curious sight. Not only you will enjoy an atmosphere of the most traditional, but it will be very exciting for all the senses. Los camels are adorned with colorful carpets, embroidered blankets and are worn on their necks a kind of cowbells. A Selçuk (Pamucak) he festival lasts days, 1 occurs an exhibition and competition, in which participants wear their best clothes camels. The 2nd day are fighting, extending from the 9:00 am to las17 passes:00 afternoon.

Among the existing bustle around the fighting area,screams are heard, cheers, traditional music and applause. The public, mostly men, prepared will portable chairs, small barbecues and of course raki, the most popular drink in Turkey, very similar to anise. Do not leave without you taste one of the famous sausage sandwiches camel “deve sucuk” accompanied by a drink that you can buy in any of the multiple positions that find. The chorizo ​​is spicy and tasty. This event is a unique opportunity to enjoy the real turkey.